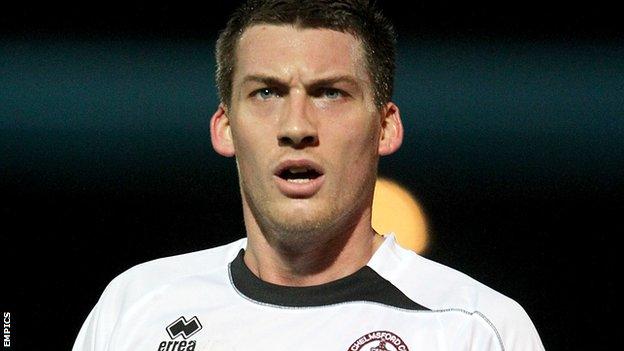 Andy Cook hit the home side's crossbar and should have done better with a header, before Max Cornhill was off target at the other end.

The game's turning point came when Mariners' Jamal Fyfield was sent off on 74 minutes for a second booking.

And Cornhill nodded in a Lee Noble corner a minute later to put the Darts within one point of safety.

The result was Grimsby's first loss in five games, but they are still third in the table and four points above the play-off cut off point.

"I think we've done well again, it was pressure - the players have responded to the pressure well - results didn't go our way Tuesday night and we didn't even kick a ball.

"Overall I'm not saying it was a brilliant game but at the end of it, it doesn't matter at this stage in the season. What matters is getting that ball into the back of the net more times than your opponents.

"I don't think it's one point from safety, it's just closer to finishing top of that mini-league. We won tonight but we've got another tough game Saturday [against Forest Green].

"To get three points from these next two games was probably better than two draws - you're not defeated. If we can get something Saturday, and I hope we can, it's going to be a super-human effort."