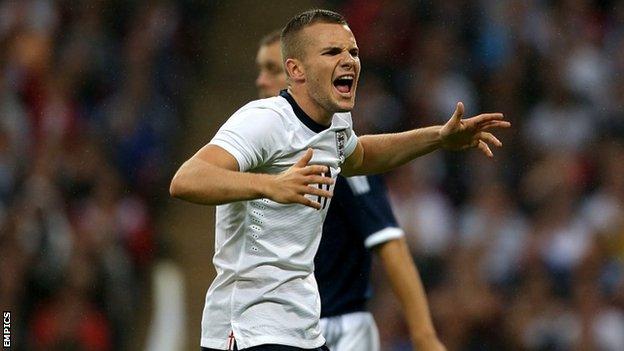 England boss Roy Hodgson has defended Tom Cleverley after an online petition was set up calling for the Manchester United midfielder to be banned from selection for his World Cup squad.

The petition, which accuses Cleverley of "inept" displays, has gained over 12,500 signatures since it was posted.

Hodgson, who has included the 24-year-old in Wednesday's squad to face Denmark, said: "It doesn't impress me.

Cleverley has been part of a Manchester United side which has struggled in manager David Moyes's first season in charge and sit seventh in the Premier League table.

But Hodgson said: "I don't think it's correct people should single out one player for Manchester United's lack of success this season.

"I would like to think that I'm not going to have the England team selected in the future by petitions from various people who are holding it against one person for a team's lack of success.

"You can't expect a football coach to have any sympathy with it."

While Hodgson is adamant Cleverley warrants his place in the party to face Denmark at Wembley, he added he can offer no guarantees the midfielder will be making his final party for this summer's finals in Brazil.

He added: "Whether he'll make the 23 or not will of course depend on a lot of things, not least of all how he does in the next couple of months.

"But that doesn't just apply to Tom Cleverley, that applies to a good many players. I'm disappointed that Tom, as a sensitive young man, has got to bear that burden.

The petition was started on the online campaigning platform Change.org by Glenn McConnell of Blackpool.

"You're talking about a young lad who wants to play football for his country and what a ridiculous thing that petition is. There's no need for it," he said.

"Maybe it's an anti-Manchester United thing, but there's absolutely no need for it. The manager has lots of good players to pick from and if he wants to pick Cleverley then so be it and hopefully he performs very well."