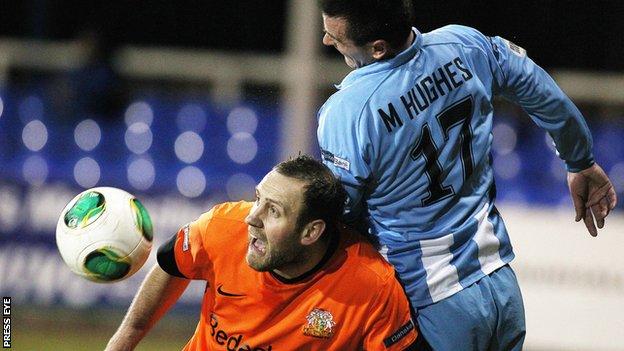 Glenavon have moved into the Premiership top six after a 2-1 comeback win over Warrenpoint Town.

Stephen Hughes sent Daniel Hughes clear on 20 minutes and the Town striker fired past keeper James McGrath to put the hosts ahead at Stangmore Park.

Andy McGrory hit the bar for Glenavon, who replace Ballymena in sixth.

Darren King almost doubled the lead when he flashed a shot across goal and just wide after 35 minutes.

The introduction of Lurgan Blues player-manager Hamilton changed the game in the second half and he levelled with a classy finish on 57 minutes.

Blaine Hughes failed to connect with a back-pass as the ball became stuck in mud, and Bates was perfectly placed to hit the net from two yards.

McGrory was denied by the woodword as Glenavon moved a point ahead of Ballymena.