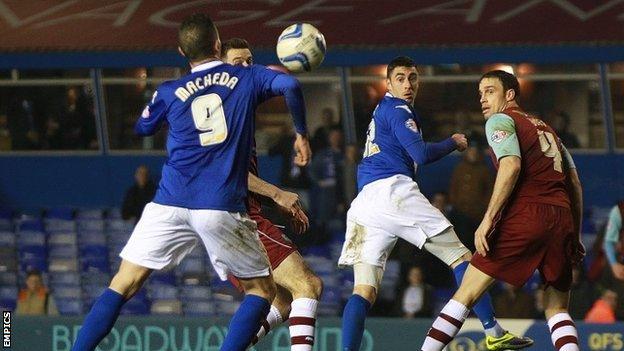 Birmingham substitute Federico Macheda scored twice as they came from behind three times to draw with second-placed Burnley.

Dean Marney headed the opener for the Clarets before Macheda levelled four minutes after his introduction on the hour-mark.

Burnley were furious at the manner of the equaliser, claiming Manchester United loanee Macheda had handled and that there had been a foul in the build-up.

However the draw increases Burnley's unbeaten run to 13 league matches and moves them eight points clear in the second automatic promotion spot in the Championship.

Burnley opened the scoring after 30 minutes as their relentless pressure finally paid off, with Marney heading home from close range after Ross Wallace's cross.

Macheda levelled with a low shot under the body of goalkeeper Tom Heaton.

Vokes thought he had won the match for Burnley, converting a cross from Junior Stanislas in the 86th minute, only for Macheda to chest in the leveller from Tyler Blackett's cross.

"It was a fantastic point. We came off a massive win against Blackburn.

"The fitness of the players was superb. The will and demand was there.

"We didn't play as well as we can but we came away with a valuable point and that is a great sign of how we have played this season."