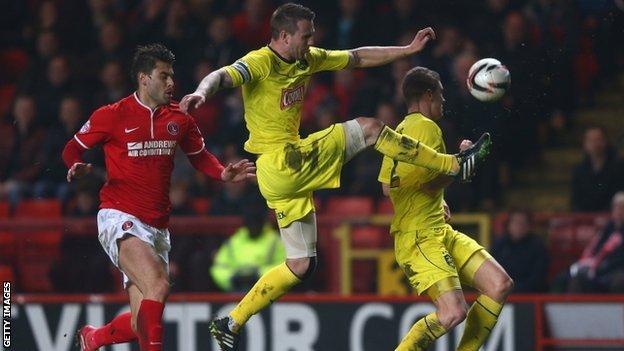 Charlton remain bottom of the Championship after a goalless draw against Huddersfield in new manager Jose Riga's first match in charge.

Charlton's Dorian Dervite headed off the line from Nahki Wells.

The Addicks, who sacked Chris Powell as manager on Tuesday, are three points from safety, while Mark Robins's Terriers are 14th.

The home fans applauded throughout the third minute to mark the departure of Powell - he wore that number on his shirt when playing as a left-back during three separate spells at the club.

As the hosts made a solid start, on-loan Standard Liege midfielder Ajdarevic was denied from distance by Smithies and Reza Ghoochannejhad turned wide from Rhoys Wiggins's cross.

Michael Morrison and Ghoochannejhad both missed from Johnnie Jackson corners before Sordell wasted two good opportunities after the break.

"That's the story of football, it's nothing new [on succeeding Chris Powell as manager]. I have so much respect for the ex-manager but it's football.

"The reaction from the crowd for my players was the most important thing. I am not here for me, I am here for Charlton.

"Often when something is new, people suspect it, but I will just focus on my qualities."

"It wasn't a game for the purists but we were good value for the point.

"We battled and worked hard and gave our fantastic away support something to cheer.

"It was a tough environment to play football in and I am very pleased with the clean sheet."