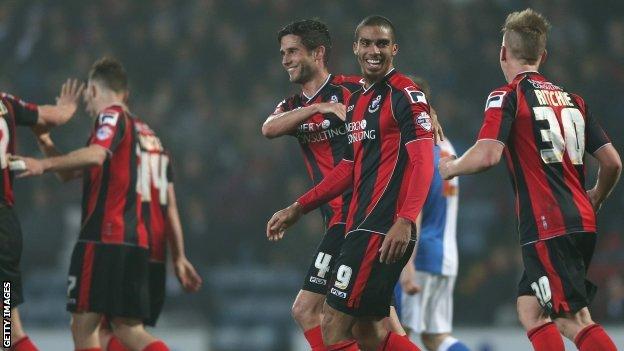 Bournemouth striker Lewis Grabban scored his 15th goal of the season as the Cherries made it three wins from three games with victory at Blackburn.

It is a third straight defeat for Rovers, who are now 10th, nine points away from the Championship play-offs.

Grabban, 26, scored the only goal of the game midway through the second half with a low drive from 25 yards.

Bournemouth's Steve Cook headed against the post in the first half from an Ian Harte corner.

Bournemouth were well on top in the opening period, with Rovers goalkeeper Paul Robinson tested by efforts from Grabban, Matt Ritchie and Simon Francis.

The home supporters at Ewood Park, already frustrated by their first loss in 35 years against rivals Burnley on Sunday, were vocal in their disappointment at Blackburn's limp second-half showing.

Bournemouth's win lifts Eddie Howe's side up to 12th in the Championship, a point behind Blackburn.

"We've got 12 games left to play and until it's mathematically impossible, you keep striving to get as high as you can and hopefully into the play-offs.

"It's important now that we regroup, we stay calm and we stick together. We've worked hard to get stability into this club.

"These last three games - we've got to make sure we stop that, obviously - but there's no need to panic or anything daft like that."

"I think we've played better than that - at times in the first half we gave the ball away under little pressure.

"I felt we were close to totally dominating the game in the first half without ever having the cutting edge that we needed and turning our dominance into goals.

"But we're still building, there's still more to come from this team and I think that's our next challenge."