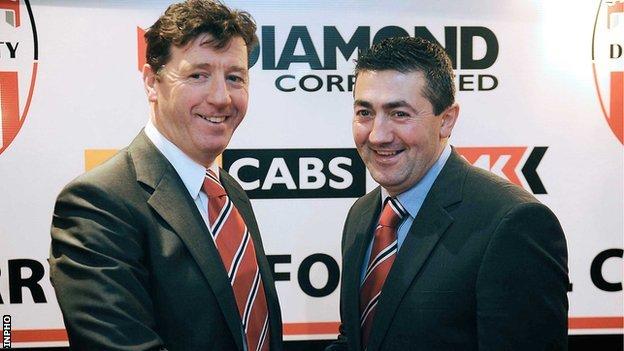 The most fascinating aspect about the 2014 League of Ireland season is that it is almost impossible to identify a clear favourite.

Of the five, Derry City are the only club under new management and, for that reason, it makes them something of an unknown quantity.

Roddy Collins, who once had a spell as manager of Bangor in the Irish League, has been extremely busy in the transfer market adding nine new signings.

There is great expectation at this club and great pressure, which is the way I like it

Supporters on Foyleside have witnessed the biggest overhaul of a City squad in years - the Dubliner's biggest challenge now is to get them to gel into a serious unit that can compete for major honours.

Some are signings with potential like striker Enda Curran, who he describes "as the best young prospect in the league", and his son Roddy Junior, who has followed him from newly promoted Athlone Town.

He will expect others, such as experienced centre-half Cliffy Byrne and former Kilmarnock striker Mark Stewart, to make an instant impact.

Surprisingly, Ruairi Higgins was shown the exit door, linking up with his former Brandywell boss Stephen Kenny at Dundalk, while Davy McDaid was allowed to leave for Coleraine.

Collins will be relying on his goalkeeper Gerard Doherty, the irrepressible Patrick McEleney and last season's leading goalscorer Rory Patterson to have a huge influence on their season prospects.

It might take the former Bohemians and Carlisle United boss another season to truly mark his stamp on his new club but he will expect this Derry team to be in the shake-up for silverware.

"There is great expectation at this club and great pressure, which is the way I like it," Collins told BBC Radio Foyle this week as he bids to bridge a 17-year gap and deliver a league title to Brandywell.

"You have to be looking at St. Pat's for sure (as favourites) but I'm optimistic about our own chances. Why wouldn't I be?" said Collins.

After their heroics in qualifying for the group stages of the Europa League under the guidance of Michael O'Neill in 2011, Shamrock Rovers have failed to qualify for Europe in each of the last two seasons.

The Hoops have signed Stephen McPhail for the new season after the midfielder allowed his short-term deal with Sheffield Wednesday to expire.

However, manager Trevor Croly will have to hit the ground running this season or his job could come under serious scrutiny.

Remember, a highly successful former League of Ireland manager in Pat Fenlon is now available after leaving Hibernian last year - although he is also being strongly linked with Linfield.

McPhail is the second former Republic of Ireland international to sign for a League of Ireland club this winter - Keith Fahy has joined the league champions St. Pat's.

Liam Buckley has done a great job in strengthening his squad for the new season - with some astute additions which will make them extremely difficult to dethrone.

Dundalk, under Kenny, will no longer have the surprise element but they will approach the season with plenty of enthusiasm particularly given the return of European football to Oriel Park.

And after clinching the FAI Cup, it will be interesting to see if Sligo Rovers can mount a more sustained league challenge and recapture the title they lost last season.

Ian Baraclough is one of the brightest managers in the league and the Englishman will want another shot at title glory.

One thing is for sure, it promises to be a season of thrills and spills and with Roddy Collins at the helm at Brandywell, it certainly won't be dull.