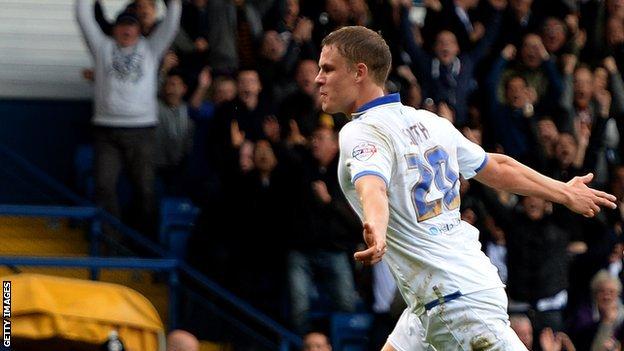 With 14 games remaining, the Whites are currently 12th in the table, eight points adrift of the play-off places.

But with eight of those games at home, 24-year-old Smith believes it is not too late to reach the top six.

He told BBC Radio Leeds: "We need wins, but getting back to Elland Road after four away games gives us confidence and we'll be going for it."

Smith acknowledged that life had not been easy recently, either for himself or for the club as a whole.

The sacking and immediate re-instatement of manager Brian McDermott at the beginning of February and continuing uncertainty over the possible takeover by controversial Italian businessman Massimo Cellino had taken "an emotional toll", he said.

"It's been very strange, but what matters most is what happens when you cross the white line. That's the only way we can affect matters and it's what we're trying to do - work as hard as we can and stick together and give the best performances we can.

"It feels like years since we've played at Elland Road, and we're really looking forward to getting back there, starting against Bolton on Saturday."

Smith, who has scored seven league goals in 25 appearances - 15 of them as a substitute - this season, has found it hard to re-establish himself in the starting line-up after being sent-off in the 6-0 defeat against Sheffield Wednesday in January.

And the recent signing of Sunderland striker Connor Wickham on loan has further increased competition for places up front.

"From a personal point of view I feel my season has stalled a little bit, the suspension hasn't helped me, and I'm looking to get back up and running and working my way back into the team and score some goals," added former Oldham forward Smith.

"Connor has arrived, he's a player with great pedigree and he's a big lad for his age, and improving our striking options which can only be good for the team.

"But there's 14 games left and hopefully I can play a part in maximising the points total and who knows where that can take us."