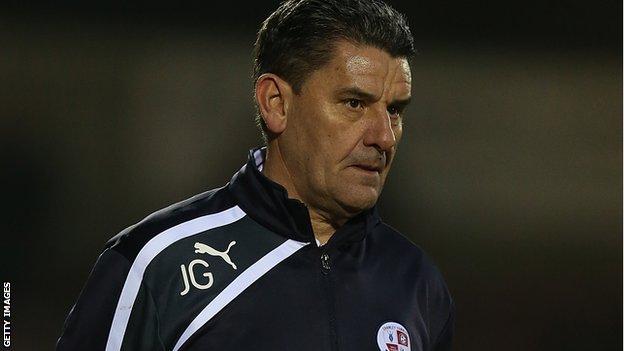 Crawley Town manager John Gregory says his side can still make the play-offs despite playing catch-up in League One.

The Reds are 13 points off sixth-placed Peterborough but have four games in hand after a string of postponements.

"The spirit that these boys have got, you can never write them off," the 59-year-old told BBC Sussex.

"I've got this points target in my head that we need to get an average of two points a game between now and the last game to have any chance."

Following a fifth successive postponement in mid-February, Crawley were only one point above the relegation zone but had seven games in hand on strugglers Bristol City and Notts County.

The West Sussex side, who went almost a month without playing a game, currently have three games in hand on every side in League One. They will play twice a week from now until the end of the season.

"I never thought a month ago that we might be talking in the same way," Gregory admitted.

"We fell away from the race completely but obviously games kept getting cancelled and teams around us kept losing, which obviously we weren't doing - we just weren't playing.

"Results have gone for us a lot this season and we have been fortunate we haven't dropped as low as the bottom four.

"We keep looking at that league table and obviously as the games in hand come along we have got to win them to stand any chance of getting in that top half."

Since his appointment as Crawley manager in December, Gregory has only tasted defeat once in his ten league matches in charge.

After beating Peterborough 1-0 on Saturday and drawing with Stevenage on Tuesday, while fellow play-off-chasers Posh were beaten at Sheffield United, Gregory is confident of making up ground.

"We are in a good position at the moment and keep moving up the table," he said.

"The team which is sixth in the table, which is the target we are aiming at, we've just pulled four points back on them.

"If it continues like that each and every week I will be delighted."