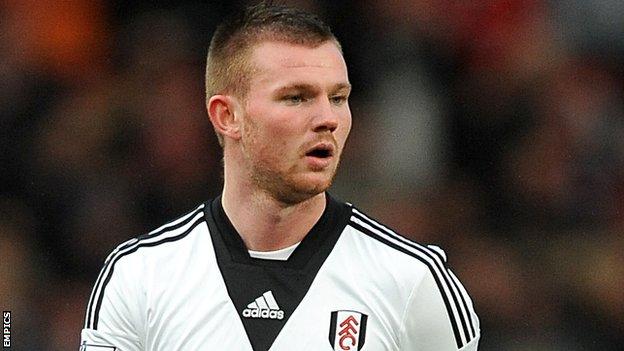 Ryan Tunnicliffe believes Wigan Athletic must quickly consolidate their position in the Championship play-off places after climbing to sixth.

The Latics moved into the top six for first time since August after a 4-1 win at Nottingham Forest.

"Hopefully we can push on now, win a few more and win the game in hand and cement our place in there [top six]," Tunnicliffe told BBC Radio Manchester.

The 21-year-old is on loan until the end of the season at the DW Stadium.

Tunnicliffe came through the youth system at Manchester United, but only made two substitute appearances at Old Trafford and was loaned out to Peterborough, Barnsley and Ipswich.

He moved to Fulham on the final day of the transfer window in January, but after featuring twice in the Premier League against United and Liverpool, manager Rene Meulensteen was replaced by Felix Magath and he was allowed to leave Craven Cottage.

"I've been here all year [in the Championship] with Ipswich so I've only had a month's break out of it and it was easy to get to grips with it," Tunnicliffe added.

"You're going to need everyone in the squad and obviously football is a team game and with people getting knocks everyone will be needed.

"[I was] born in Bury and grew up in Heywood, so it's nice to be back home and only half an hour away."