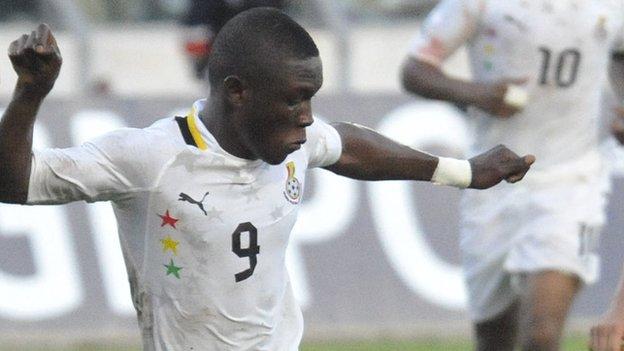 Ghana striker Abdul Majeed Waris is keen to extend his loan period with French Ligue 1 side Valenciennes beyond the current six-month agreement.

The 22-year-old has scored four goals in eight matches for Les Atheniens but his deal is set to run out in May.

He hopes his Russian side Spartak Moscow will agree to let him remain at Valenciennes beyond this season.

"I'd like to stay. I've settled down pretty well and enjoying life in France," Waris told BBC Sport.

"I'm really looking forward to more playing time. I think it was the best move for me.

"Hopefully, the clubs will have a positive talk. I've been given a chance here and started every game, which I can only be happy with."

Waris, who made his international debut in February 2012, has scored three goals in six appearances for the Black Stars and helped them secure a third successive World Cup qualification.

He was named the Swedish Premier League's player of the year in 2012 after scoring 23 goals in 29 games for BK Haken.

He missed the last month of the 2012/13 Russian season because of a knee problem but has bounced back to regain his best form.