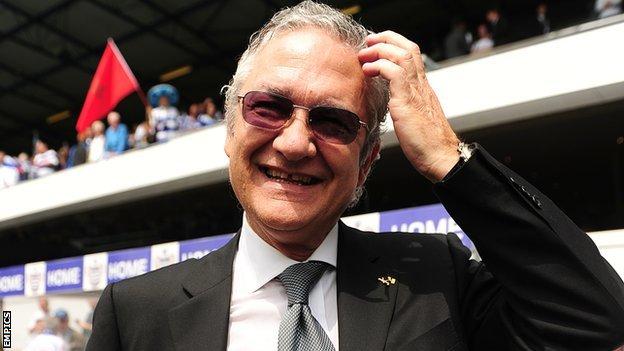 Gianni Paladini has revealed that he is still a prospective buyer of Birmingham City - if the struggling Championship club are prepared to talk to him.

I cannot wait for Birmingham forever

"They know my telephone number, they know my lawyer," Paladini told BBC WM.

"If there is something serious they want to do, they know I'm available. If not, there's nothing I can do. But I cannot wait forever. Birmingham fans just want to find someone to take the club forward without all the aggravation."

This week's news that, after a three-year long trial, former chairman Yeung has been found guilty of money laundering does not appear to have any immediate impact on the club, following his exit at boardroom level last month.

But Yeung still has his own men on the board, both at St Andrew's and in Hong Kong with the Championship club's parent company, Birmingham International Holdings Limited (BIHL). And Solihull-based Paladini is on the alert to ascertain their future plans.

"I feel sorry that Mr Yeung has been found guilty," said Paladini. "But this is a big saga that has been going on for one year and a half. It is like a soap opera.

"We agreed a figure and I haven't changed anything. I thought I had signed an agreement. That figure was very close to £30m. £17m guaranteed, with various bonuses with promotion.

"Then I found out that the agreement was not accepted by Mr Yeung and we moved on."

Blues were also twice approached by a sports management company representing another consortium interested in purchasing the club, which was first put up for sale by acting chairman Peter Pannu in May 2012.

City, who were relegated from the Premier League in 2011, stand 17th in the Championship under Lee Clark, nine points clear of danger, but 16 points adrift of the play-off pack.