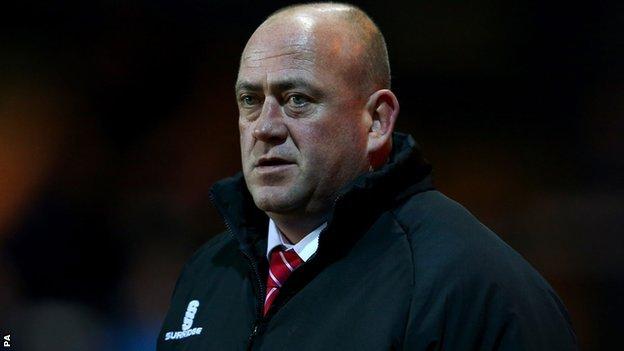 Kidderminster Harriers have sacked boss Andy Thorn after just two months in charge and appointed Gary Whild as manager until the end of the season.

But, after starting with two wins, his side have won just once in eight games.

The former Redditch United manager, brought to Aggborough by Burr in May 2010, has been out of the first-team picture since Thorn's arrival.

"I'm proud of what Steve Burr and myself achieved," he said. "Hopefully we can rekindle some of that now and get everybody singing from the same hymn sheet.

"I'm looking forward to getting back in with the lads and getting things back on track."

Former Redditch chairman Rae, who worked with Whild when they were on the board together at Valley Stadium, added: "Gary knows the club, the players and the supporters.

"His record here, working with Steve, is very strong. I know how hard he has worked to bring players here who've been extremely successful.

"We have agreed to take things until the end of the season and to then look at the situation again but I am confident that Gary and his backroom staff can help bring some confidence back into the team and give supporters a lift.

"With 13 games left, and in the position we're in, our aim is still to get into the play-offs. There is a big game to be played at Wrexham on Saturday but I'd love to see a big crowd here at Aggborough against Macclesfield next Tuesday night."

Whild will be 'well received'

"In all honesty, this comes as no surprise. As much as everyone would like to have seen Andy Thorn be successful, there were a few areas that left people concerned as to which way Harriers were going, most notably against Cambridge on Saturday. Having tried to build a defensive understanding, he seemed to be at a loss to explain just how Harriers shipped five goals.

"Gary Whild's appointment will be very well received. He has been instrumental in making Harriers the force they have been. It will bring support back from the fans.

"It has all gone sour very quickly in 2014. But it's not too late to rectify it this season."

Thorn's sacking makes him the fourth high-profile departure from the club since the turn of the year, following Burr, former chairman Serrell and the owner of the club's main sponsor, John Davies, who also quit the board at Aggborough.

Following Serrell's departure, in response to criticism from fans for his sacking of Burr, Harriers appeared to have stabilised matters on the field when Thorn's side won 2-0 at home to Woking last Tuesday night.

But, after letting a first-half lead slip to get thumped 5-1 at Conference Premier promotion rivals Cambridge United on Saturday, which left Harriers 10th in the table, four points adrift of the play-off zone, Rae has opted to act.

A Harriers statement said: "The club feels that by making a change now, the team will have a better opportunity to not only finish the current season strongly but, equally as importantly, will also be able to carry momentum forward into the start of a new season - whichever division that may be in."

Thorn's sacking comes 18 months on from the end of his only previous stint in club management when he was also sacked by Coventry City.