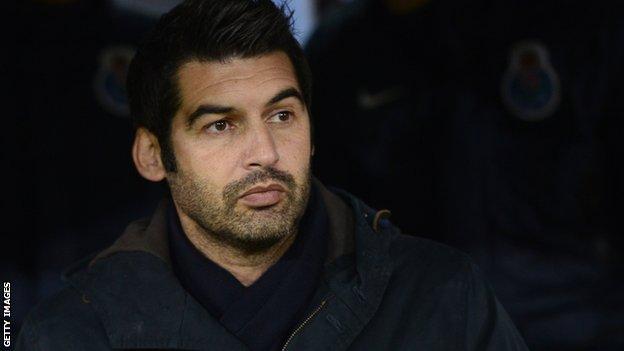 Reigning Portuguese champions Porto have sacked coach Paulo Fonseca after only nine months at the helm.

Porto's five-and-a-half-year unbeaten home record was ended by Estoril last week before they surrendered a 2-0 lead to draw at Guimaraes on Sunday.

Reserve-team coach Luis Castro has been named as interim manager.

Porto are the 27-time Portuguese champions, having won the title in each of the past three seasons.

They were knocked out in the Champions League group stage this season, but have reached the last 16 of the Europa League, where they face Napoli.

Former Porto defender Fonseca succeeded Victor Pereira in June 2013 after taking minnows Pacos de Ferreira into the Champions League for the first time in their history.

He was their eighth coach in 10 seasons since the departure of current Chelsea boss Jose Mourinho, who led the club to the 2003 Uefa Cup and 2004 Champions League.