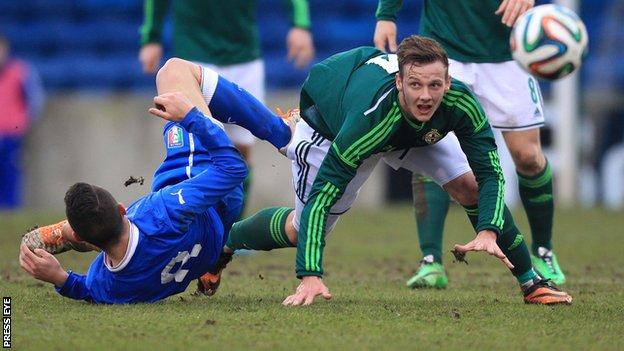 Northern Ireland Under-21s suffered a sixth defeat in seven Euro 2015 qualifiers as they were undone by two second-half Italy goals in Lurgan.

Manager Jim Magilton, who took over from Stephen Robinson in the autumn, saw his side contain Italy until Daniele Rugani's 59th-minute goal.

Marcello Trotta, on loan at Brentford from Fulham, sealed Italy's win in the final minute.

Jamie Sendles-White went closest to scoring for the Irish after the break.

However, the home team posed little attacking threat at Mourneview Park against their higher-ranked opponents and were unable to add to their paltry tally of two goals in the campaign.

Sheffield Wednesday forward Caolan Lavery was the home side's most willing outlet in attack, and he was involved in the 26th minute when Carl Winchester forced a save from Francesco Bardi in the Italian goal.

Goalkeeper Conor Brennan earned the first booking of the match after half an hour but Northern Ireland were defending well, limiting the Italians to Federico Bernadeschi's blocked shot moments later.

Ryan Brobbel missed the target eight minutes before the break, while Federico Viviani and Danilo Cataldi both missed for the visitors before the whistle.

Italy upped the pressure after the restart, forcing a series of corners, and opened the scoring just before the hour-mark.

Viviani's curling free-kick from the left fell perfectly for Rugani and he headed into the corner from six yards.

It looked set to finish a one-goal game until Trotta got on the end of Jacopo Dezi's pass and sealed the win.