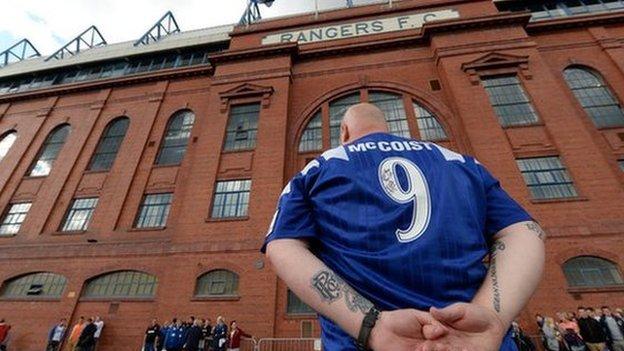 However, in the odditorium that is Ibrox, Green's bombast of Friday was another cringe-making moment.

His new life may have taken him far from Glasgow, to an 18th-century castle in Normandy, but it would appear that the Yorkshireman is still of the view that he was God's gift to Rangers.

Self-regard was always a stock-in-trade of Green's; self-awareness, far less so.

At a time when Rangers have taken out a £1.5m loan in order to keep the lights on, Green's poor-mouth performance about being under-compensated for his work at Ibrox was laughable and must have served as a firm kick in the unmentionables to every fretting Rangers fan.

His reappearance was fitting in one way, though. Things have reached the point of a free-for-all at Rangers. Pot-shots are being flung left, right and centre between suggested saviour Dave King and the board.

The supporters needed Green popping into this saga like they needed a hole in the head.

You watched Green climbing back into the narrative and, in that moment, it was easy to imagine the Rangers supporters repeating that line from Jerry Maguire, the film about the sports agent played by Tom Cruise.

Maguire/Cruise was at what he thought was his lowest point only for further mishap to befall him. "Jump into my nightmare," he said, sighing. "The water's warm."

The way in which former director King and the current Rangers board are training their guns on one another in public is remarkable.

It was only last November that King called for some kind of decorum among key people in the Rangers story. "The best interests of the club will not be facilitated by playing it out in the media," he said.

So much for that plan.

The tit-for-tat carried on. David Somers, the chairman, slammed King and King slammed back. Director Sandy Easdale got involved and King replied. Then King went again.

This is mortifying stuff. King is calling into question the integrity of the board while playing down other integrity questions closer to home, such as those raised by his guilty plea and subsequent conviction for epic contraventions of South African tax law, which eventually cost him more than £45m in cash and assets.

We know that many Rangers fans are behind King regardless. This was the man who previously invested £20m in Rangers and lost the lot. That wins him kudos. Equally, it's the same man who sat on Craig Whyte's board of directors and who, according to the SFA's judicial panel, failed to do enough to question the former owner's disastrous behaviour.

It's a measure of the mindset of Rangers people that so many have placed so much trust in King, a man denounced as a "glib and shameless liar" by a South African court.

Who will win this battle? It depends on how serious King and his supporters really are and what lengths they will go to in order to get a result

If the fans pick King over the board - and they are, in increasing numbers - then that tells you a lot about how the current incumbents are performing. They have been saying for months that there is no pressing cash crisis, while at the same time taking out a short-term, and high-interest, loan of £1m from one of its institutional investors, Laxey Partners.

Their 'nothing to see here' mantra rings suspicious. Apart from the £1m loan (and the bank charges associated with it) there is an interest-free loan of another £500,000 from Sandy Easdale.

Why would a club with no pressing need for money take out an emergency loan and then secure part of it against club assets? They haven't adequately explained it.

There are questions everywhere for the board and not many answers. The Rangers Standard website wrote about some wealthy Rangers-supporting businessmen who would have been prepared to offer the club loans at more favourable rates of interest than the Laxey agreement.

John McClure was one such businessman. George Letham is another. The board are said to be considering ditching Laxey's deal and taking up Letham's offer instead.

What does it say about this board of directors when a fans' website can track down wealthy Rangers supporters who are willing to loan money on more attractive terms than the club's investment committee could negotiate?

These supporters run this website in their spare time. They are not on the club's payroll. As head of the Rangers investment committee, it is the job of director Norman Crighton to do this kind of business and he's rewarded handsomely for it.

And yet, in the hours between putting in a day's work and putting the kids to bed, the fans can find better deals than he can? Crighton really ought to state his position on all of this.

At the heart of this are the fans and their season-ticket money and the power they wield because of it. Rangers can't live without that cash. More and more the supporters are saying that the board are not getting it until they answer questions and bring transparency where currently everything is clouded.

King and the fans' associations want to drip-feed the season-ticket money into the club by way of a trust. It's a device that could bring the board to heel or bring the club to its knees. It's high-stakes stuff, but the fans are mobilising, that's for sure. Mobilising behind King.

He is said to be on his way to Glasgow soon for this showdown with the board. They should put the Rangers TV cameras in the room and sell it on pay-per-view. In a relative blink, the cash crisis would ease.

Who will win this battle? It depends on how serious King and his supporters really are and what lengths they will go to in order to get a result.

Equally, it depends on how much financial trouble the club is truly in and how short of answers they really are.

To the former, the response is "very serious" and in the case of the latter the reply is always "not much trouble at all".

But you learn to be sceptical about everything you are told in this story.

Green's cameo might have brought an air of black comedy, but at its essence the fight for control at Rangers is a thriller - with a touch of horror thrown in.