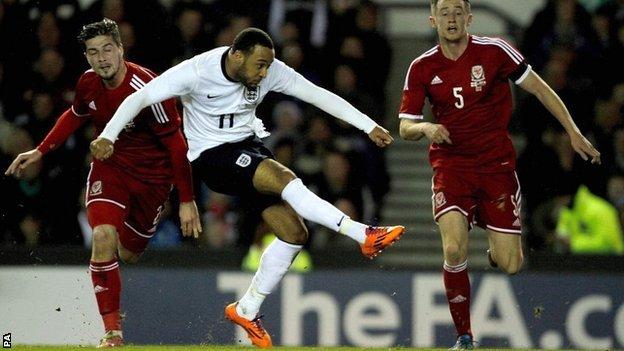 England's Under-21 side are on the verge of qualifying for the Euro 2015 play-offs after Nathan Redmond's goal helped them beat Wales.

The Norwich winger had two good chances before he cut in from the left to find the bottom corner from 20 yards.

Victory keeps England top of their group, and with the top two advancing, they are nine points clear of third-placed Wales with three games left.

The visitors were also inches from equalising when Tom Lawrence's shot deflected past Butland's post.

Even though those opportunities were isolated, Geraint Williams's stubborn side will hope they can overtake second-placed Moldova to join England in the next stage.

But without hitting the heights of a record 9-0 win over San Marino in their last game, England continued their unbeaten qualification campaign and are now six points above their nearest group rivals.

QPR loanee Ravel Morrison was substituted in the second half after an underwhelming performance but England enjoyed better possession throughout the contest at Derby County's iPro Stadium.

While solid, the hosts could not quite open up the Welsh side, who had the best chance before the break when Burns raced clear of John Stones on the counter attack but dragged his shot wide.

That opportunity appeared to focus the England players' minds as they improved but they were missing a spark in the final third until Redmond found the bottom corner after 56 minutes following a jinking run.