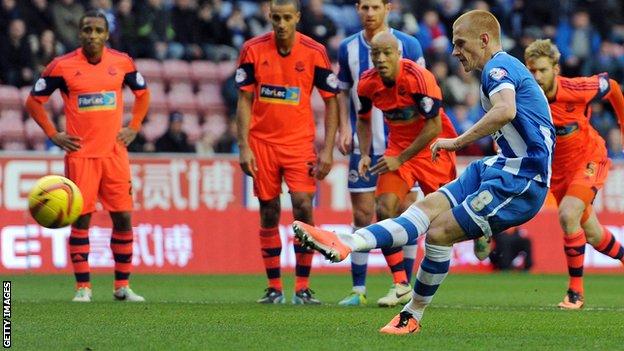 The 28-year-old, whose goal beat Manchester City in last year's FA Cup final, suffered a double leg break against Barnsley on 18 February and will miss the rest of the season.

His new deal will keep him at the DW Stadium until the summer of 2015.

"We want to give him a chance to get fit and back in contention," said Latics chairman Dave Whelan.

"He's absolutely delighted and it's what he deserves because he's been a great servant to the club."

The midfielder scored three times in 11 appearances under the German, but was carried off on a stretcher against Barnsley with a fractured tibia and fibula.

Watson, who joined Wigan from Crystal Palace for £2m in 2009, also broke his leg against Liverpool in 2012, six months before his stoppage-time header won Wigan's first major trophy as they beat Manchester City at Wembley.

The two sides meet again in the quarter-final of this year's competition on Sunday.