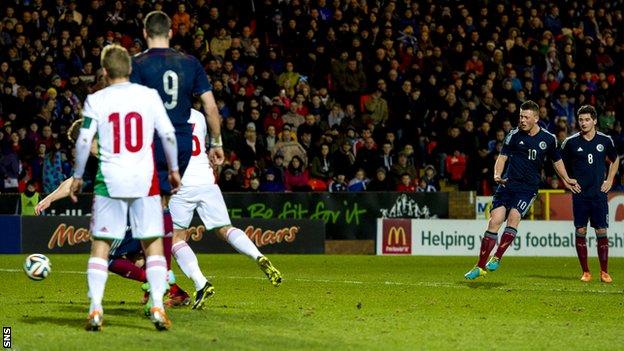 Scotland's Under-21 side surrendered a two-goal lead as Hungary fought back to claim a draw in a friendly at Tannadice.

However, a handball by substitute Joe Chalmers gave the visitors a penalty and Andras Rado converted.

And Rado's turn and shot from 10 yards levelled the score with three minutes remaining.

The match was part of Stark's preparation for the European Championship qualifier against Netherlands in May and, although buoyed by the first-half performance, the coach will have been left frustrated by a second-half collapse.

St Mirren's Sean Kelly and Craig Slater of Kilmarnock made their Under-21 debuts in the starting line-up, while Jack Grimmer, John McGinn, Sam Stanton, Danny Handling and Chalmers earned their first caps from the bench later in the match.

After Scotland goalkeeper Jordan Archer had rushed from his goal to deny Patrik Bacsa, the home side took the lead from a 25th-minute free-kick awarded for a foul on Callum Paterson.

Kenny McLean and McGregor and stood over the ball and it was the latter who drilled the ball under the defensive wall past Levente Jova.

There was then a temporary stoppage as some of the 4,537-crowd were moved from the almost-packed lower George Fox stand to another area of the ground.

Seven minutes before the break, Fraser emulated McGregor in scoring his first goal for the Under-21s with tap-in following a sweeping passing move.

After a raft of second-half changes, Chalmers was penalised for hand ball and Rado's spot-kick flew high past Archer's replacement Chris Kettings.

Rado levelled the match when he took a pass from Istvan Kovacs, turned inside and flashed his shot from 10 yards into the far corner.