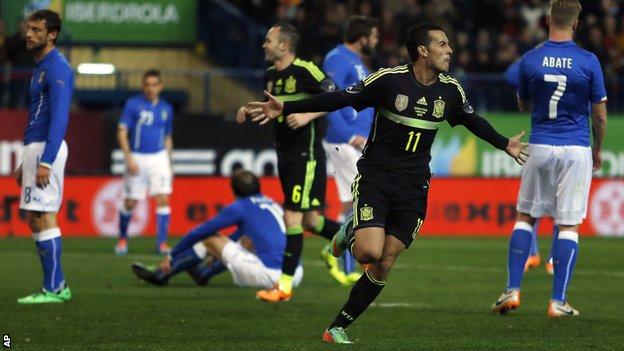 England's opening World Cup opponents Italy suffered a 1-0 loss against Spain as teams continued their preparations for this summer's tournament in Brazil.

Spain forward Pedro fired in a second-half winner against the Azzurri, who face Roy Hodgson's men on 14 June.

Real Madrid striker Karim Benzema thumped in a powerful shot for the opener, before turning provider for Paris St-Germain midfielder Blaise Matuidi to sweep in an acrobatic effort.

After a difficult start to the season, where he was derided by some Real fans, Benzema has scored 11 goals in his past 13 games for the Spanish leaders and carried his impressive form on to the international stage.

It was also a memorable night for his Bernabeu team-mate Ronaldo, who moved clear of ex-PSG striker Pauleta at the top of Portugal's all-time goal chart.

The Ballon d'Or winner scored his 48th and 49th goals for his country, with strikes from Raul Meireles, Fabio Coentrao and Edinho in between, as Cameroon were swept aside.

Atletico Madrid's Brazil-born striker Diego Costa, who is second top scorer behind Ronaldo in this season's La Liga, could not score on his international debut for Spain following his controversial switch of allegiance. He won two caps for Brazil, both in friendlies, before taking Spanish citizenship through residency.

Barcelona superstar Lionel Messi was unable to inspire Argentina as they drew 0-0 against Romania, who failed to qualify for the World Cup finals.

Manchester City striker Sergio Aguero could not find a way past his club team-mate Costel Pantilimon, who played as a second-half substitute for the home side in Bucharest.

Three-time World Cup winners Germany were booed off after failing to impress in a fortunate 1-0 win over fellow 2014 finalists Chile in Stuttgart.

The South Americans, who beat England in November, dominated for large spells but were made to pay for their profligacy by Bayern Munich attacking midfielder Mario Gotze's first-half winner.

A Belgium side packed with Premier League talent drew 2-2 against Ivory Coast after goals from Manchester United midfielder Marouane Fellaini and Roma's Radja Nainggolan had put them in control.

Ivory Coast have been drawn alongside Japan, Colombia and Greece in Group C, with the potential of a last-16 tie against England for the two teams which advance.

Ecuador produced a remarkable fightback from 3-0 down to earn a 4-3 injury-time win against Australia at Millwall's The Den.

The South Americans, who are in France's Group E at the World Cup and face England in a friendly before the tournament, trailed to first-half goals from ex-Millwall midfielder Tim Cahill (2) and Crystal Palace's Mile Jedinak.

Cahill's brace saw him become the record goalscorer for Australia, who have been drawn in a difficult Group B containing Spain, Netherlands and Chile.