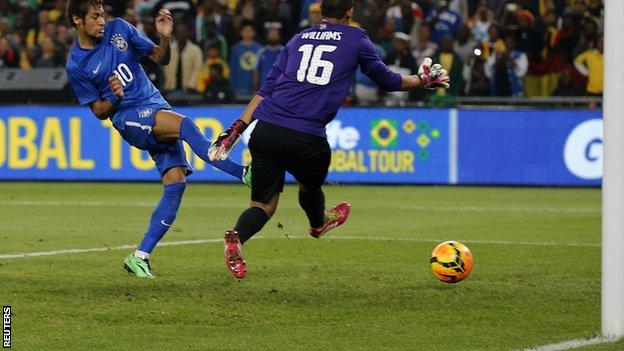 A Neymar hat-trick helped Brazil to a seventh successive win as they thrashed South Africa in Johannesburg.

The Barcelona striker, 22, fired in an angled drive after Oscar had chipped the 2002 World Cup winners ahead.

Luiz Felipe Scolari's side changed from a yellow to blue strip at half-time and Neymar scored from a tight angle 26 seconds after the break.

Willian and Dani Alves went close, Fernandinho scored from long-range and Neymar combined with Jo for his third.

Neymar, Barcelona's record-signing, hit an international hat-trick in an 8-0 win over China in 2012.

His second treble came 99 days before the start of the World Cup in Brazil and the five-time winners kept up their impressive form ahead of the tournament in devastating fashion at Soccer City.

Manager Scolari suffered a testing run of form after succeeding Mano Menezes as manager in November 2012, but has now guided Brazil to 13 victories in 14 matches - a run which saw them win the Confederations Cup.

Brazil have 13 wins from 14 matches and are scheduled to play two warm-up games ahead of the 2014 World Cup. They face Panama on 2 June and Serbia on 5 June.

They go into this summer's World Cup as favourites and face Croatia, Mexico and Cameroon in Group A.

South Africa - World Cup hosts in 2010 - contributed to their visitors' early dominance with some lacklustre defending and Chelsea's Oscar latched onto Hulk's pass to lift the ball over goalkeeper Ronwen Williams.

Neymar was denied by a tipped save, but doubled the advantage on 41 minutes with a driven shot from the left side of the area.

The former Santos front man coolly lifted the ball over Williams when one-on-one for his second and Willian came within inches of adding Brazil's fourth just seconds later as his shot flew wide.

Fernandinho, playing in his sixth game for the national side, notched a first international goal when he pounced on a poor clearance to smash home from outside the box.

And Brazil - who get the 2014 World Cup under way against Croatia in Sao Paulo - completed the scoring when Neymar linked with former Manchester City striker Jo to condemn South Africa to their biggest ever home defeat.