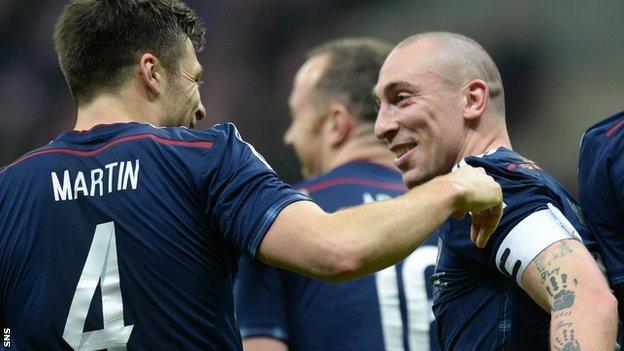 Scotland manager Gordon Strachan said his side's 1-0 friendly victory over Poland will have no effect on either team's Euro 2016 qualifying campaign.

Captain Scott Brown scored the only goal in Warsaw's Stadion Narodowy, where the two sides will meet again in October in a European qualifier.

"It meant absolutely nothing, because there will be changes," said Strachan. "These two teams won't be the same.

"But what it does, for the next couple of months, is give us confidence."

Scotland's next friendly is likely to be at Fulham's Craven Cottage in May, with Nigeria having invited Strachan's side to play them in London.

Wednesday was Scotland's third successive away win, and they have gone five matches unbeaten, the past four without conceding a goal.

"That's good and it's not easy to do that," Strachan told BBC Scotland, though he is not getting carried away with his side's improvement.

"It wasn't a great game. I don't think you could expect anything other than that at this time of the season in a friendly.

"It gave us a chance to have a look at them and vice versa, but we got some bonuses."

Strachan, who put the clean sheet down to hard work by his whole team, also praised debutant Andrew Robertson.

The 19-year-old Dundee United left-back came on as a second-half substitute a year to the day after playing for amateurs Queen's Park in a victory over Elgin City in Scotland's lowest tier.

"I thought it didn't faze him and that adds to our squad. If he can keep up his performances then there's no reason why he shouldn't be in the next one," Strachan said.

But the manager reserved most praise for Brown, whose powerful finish from the edge of the box followed up his winner in the previous friendly in Norway.

"We're looking to be more potent in attack. We need to work at that, that's for sure, but we're hopeful of having players over the next six months who will add to that."

Brown put the improvement in form down to the players understanding their roles under Strachan.

"It shows you the form the lads are in," said the Celtic midfielder. "We're doing really well, we're listening to what the manager's got to say and we're putting it in place on the pitch.

"We're getting up the park as well and we're defending as a group. I think that's the main thing.

"We look like a team out there, we try to keep the ball as well."

Asked if he agreed with Strachan that victory would mean little come their return to Warsaw, Brown suggested it did give his side a slight edge.

"Everyone in the changing room is delighted," he added. "Poland are in our group and we've had a look at them. We've given a good account of ourselves."