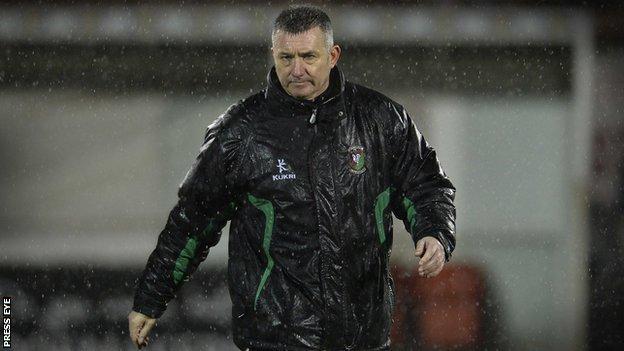 Glentoran will be without a number of key players and have injury worries over others as they bid to improve their disappointing home league record.

John McGuigan will not be available for the game with Ballymena United at the Oval after being arrested in connection with drugs offences earlier this week.

Johnny Addis, Steven Gordon and William Garrett are all suspended while Marcus Kane is injured.

Glens manager Eddie Patterson said the club would "take John (McGuigan) out of the firing line" by not including him for the floodlit Premiership game with the Sky Blues.

"John's head is not in the right place to play at the moment and we are giving him the duty of care that we owe him," explained Patterson.

A statement issued by Glentoran on Thursday made it clear that "at present no employee of the club has been charged with a criminal offence relating to illegal drugs".

"The club has a zero tolerance approach to illegal drugs in any form. The club will always act in accordance with those principles," it added.

Patterson argued that "injuries and suspensions have meant that we haven't had a good run with a settled side for a long time".

"We've had some good performances away from home this season and I can't put my finger on why our home form is so poor.

"Maybe the lads feel a bit more pressure, but I have to say our supporters have been great to us all season.

"Ballymena are a team on form and they will be full of confidence with an Irish Cup semi-final to look forward to in a few weeks' time."

The Sky Blues welcome back midfielders Gary Thompson and Mark Surgenor after bans, but have defender Mark McCullagh suspended as they aim to make it seven victories from their last nine league visits to the Oval.

United trail Glenavon by a point in the race for a top six place in the Premiership ahead of the split in three week's time, the Lurgan Blues having a match in hand.

The sides played out a goal-less draw at the Oval in their first league meeting this season, with Glentoran emerging 4-3 winners from a seven-goal thriller at the Showgrounds in November.

In Friday night's other game. Coleraine entertain a Crusaders side who will hope to bounce back from their County Antrim Shield penalty shoot-out defeat at the hands of Linfield on Tuesday night.

The Bannsiders are without suspended duo Joe McNeill and Gary Browne for the visit of Stephen Baxter's team, while Ryan McIlmoyle is an injury concern.

Crues midfielder Richard Clarke returns to the squad after missing the Shield decider because he was cup-tied.