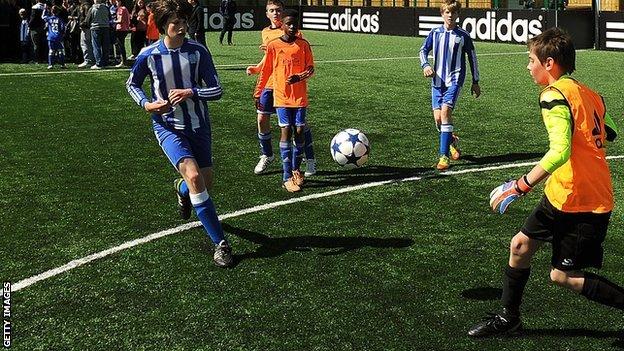 Adults watching youth matches in Lancashire this weekend are being urged not to shout or directly communicate with players, referees and coaches.

The FA will review the initiative as part of its Respect campaign.

It has provided a bursary to clubs promoting the event, and one league has spent £1,000 on Silent Weekend bibs for parents to wear.

An FA spokesman said: "Anything that addresses the behaviour of participants and spectators at grassroots level should be applauded."

All of the Lancashire FA's youth leagues, including more than 200 clubs, have pledged their support for the event.

Adults are being encouraged to applaud both teams on to and off the pitch, and to have only quiet discussion among themselves.

Yates added: "We have addressed structural changes in youth football, but we have not addressed behaviour by adults on the touchline.

"We want parents and coaches to be good role models. I watched an under-nine game in the autumn where one child was reduced to tears by baying parents.

"Parents don't shout out at their child's school play, gala or piano recital, but they seem to think it is all right to do so at a football match."

Yates said less than half of one per cent of disciplinary matters dealt with by the Lancashire FA involve acts of violence or aggression on the touchline, adding: "I don't want to give the impression that we have gangs of homicidal maniacs because that is not the case."

Mike Caton, who runs the Feniscowles and Pleasington Youth teams in the East Lancashire Alliance and Accrington District Junior League, believes the initiative will be a success.

He said: "There is no doubt that many children suffer because they cannot cope with shouting from coaches or parents. In my experience an average of two or three players in each team will be affected by it.

"There is something about football that brings out the best and worst in people."