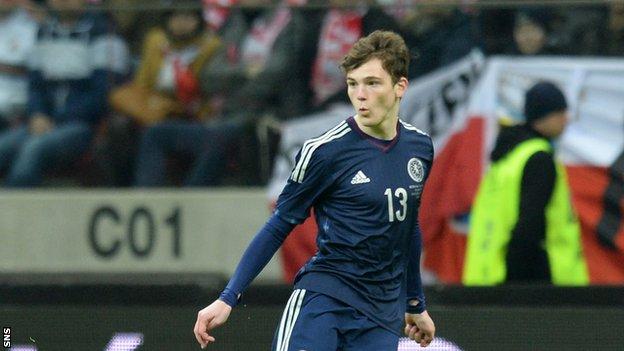 Andrew Robertson described making his Scotland debut as "a massive and proud moment".

The 19-year-old Dundee United defender earned his first cap in the victory against Poland in Warsaw.

"Some of them were here to cheer me on and I'm sure those that weren't here will have happy faces," he told BBC Scotland.

"Hopefully, I've got many Scotland squads to come. You can't look too far forward."

This time last year, Robertson was playing for Queen's Park against Montrose at Hampden.

The left back came on in the 67th minute in Warsaw, replacing Barry Bannan and helping the side secure victory courtesy of Scott Brown's strike.

"It's just about having the confidence in yourself and a good family background behind you. That pushed me on.

"I've just got to finish strong for Dundee United this season, starting with a massive game on Sunday in the Scottish Cup.

"We've got to keep looking forward. My family are maybe pinching themselves more (than me) because everything's coming so quickly."

"It's always good to come away from home and get a win.

"We didn't create much going forward but we were resilient - the back four and the midfield four were fantastic."