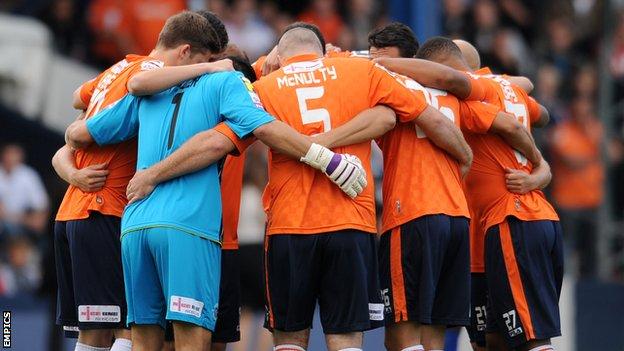 The Hatters, a top-flight side 22 years ago, are 14 points clear at the top of the Conference Premier, a league they have been in since 2009 after 89 years in the Football League.

Sweet told Late Kick Off East: "If you compare us to clubs that have been at a low level but are now in the Premier League and Championship - there are no boundaries for what we can achieve."

Late Kick Off East will be assessing the impact of dropping out of the Football League and the difficulty of getting back up.

The team will take a close look at Luton and Cambridge United, as well as the difficulties facing Northampton Town should they fail in their bid to survive in League Two.

Watch Late Kick Off in the East of England on BBC One on Monday, 10 March at 23:20 GMT or on the iPlayer for seven days after

Championship clubs Yeovil and Doncaster were playing non-league football as recently as 2002-03, while Premier League sides Swansea and Hull have played in League Two in the past decade.

The Hatters have been a prime example of how difficult it is to come straight back up after dropping into the Conference.

Their Football League status ended five seasons ago, brought on by a 30-point deduction for paying agents through a third party and failing to come out of administration.

It was a third relegation in as many seasons for the stricken club.

A consortium, fronted by TV presenter Nick Owen, who is now Hatters chairman, and with Sweet on board, took over the club in 2008 and have eradicated the mismanagement that exacerbated the team's swift decline.

But while progress has been made in off-field affairs, four managers have tried and failed to win that elusive promotion.

The Hatters are playing down the near-inevitability of succeeding this time around, but boss John Still would have to surrender a 14-point lead at the top of the table if the Bedfordshire club are not to go up automatically.

"It means an awful lot more than just one league to us," said Sweet.

"We feel it is the beginning of a resurgence.

"We've done everything we possibly can, all the preparation is there, we just want to keep winning matches and for that green light to go. We think we can actually spin on a bit.

"League Two is not the destiny of course, without appearing to be arrogant.

"We took over the club in 2008 with the vision that we had 12 years to put it back into a position where we would be comfortable, where we feel our natural position in the pyramid would be.

"That's not League Two - and that's no disrespect to League Two. We've served our time and I just think when we get back into League Two it will give us a bit more of an ambition."