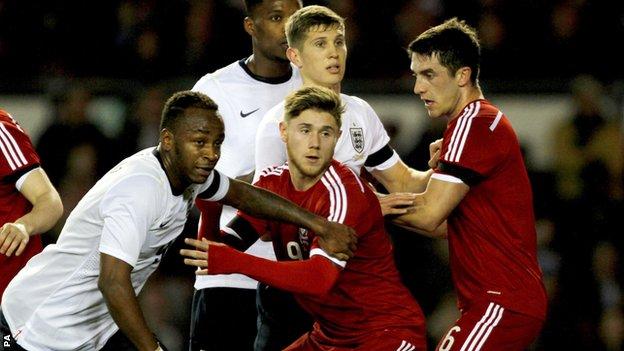 Wales Under-21 manager Geraint Williams was disappointed his side came away with nothing following the 1-0 defeat to England in Derby.

England are on the verge of qualifying for the Euro 2015 play-offs after Nathan Redmond's goal secured victory.

The win keeps England top of group 1, and with the top two advancing, they are nine points clear of third-placed Wales with three games left.

"I'm disappointed we didn't take something from the game.

"We had a game plan. Obviously we knew England would boss possession but we felt we had the pace to hurt them on the counter-attack.

"We knew we would create two or three good opportunities and we had to take them.

"That was the only thing lacking from the performance and I'm just disappointed the players didn't get anything out of the game apart from the good performance."

Williams' side are three points behind second-placed Moldova, who host England in the final round of matches in September.

Wales face England at home in August before September away games in Finland and Moldova complete the campaign.

Former Derby County midfielder Williams has been pleased with Wales' progress in Group 1 despite losing two of their opening three matches, including the shock 1-0 defeat in San Marino last September.

"What we're doing is building for the future," Williams added.

"We've got a philosophy in Welsh football now that we are trying to put into place.

"If you've got that philosophy and you want to stick to it then you're going to get bad results along the way. But we believe it's the right way to go.

"San Marino was a massive low for us but it was also the start of our climb back up when the players said 'let's do it the Wales way.

"Since then the results have been much better but the performances have been excellent."