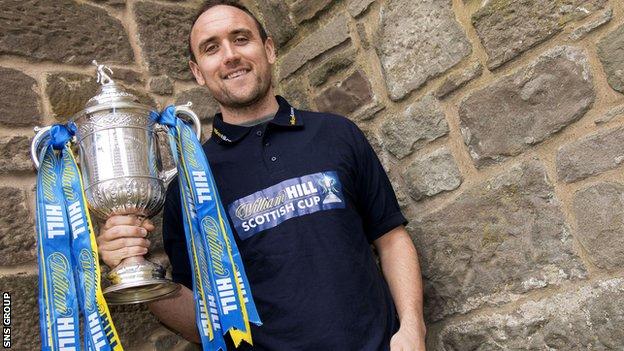 The Perth club have never won a major trophy in their 130-year existence.

"It would be great to be part of history," said the 28-year-old midfielder. "And I hope we can do it for the team and for the supporters.

"If we perform on the day, we're a match for anyone and we certainly won't fear any team in the competition."

The Saints are two games away from their first Scottish Cup final, having beaten Livingston and Forfar to reach the last eight.

And, with trophy holders Celtic out of the running, the field is wide open.

Celtic's conquerors Aberdeen, who are in this month's League Cup final after thumping St Johnstone in the semi-final, are favourites with the bookmakers.

And the Saints were undone by the Dons again at the weekend after a 3-0 midweek win over Motherwell.

"You've got to look at Aberdeen who are having a great season," Croft told BBC Scotland.

"But I feel like we are playing well at the moment. We got a great result against Motherwell and we put in a good performance against Aberdeen; we just couldn't get that goal."

Raith Rovers may be sitting on eighth in the Championship, without a league win this year, but the Fifers did stun Hibs 3-2 at Easter Road to set up their date with St Johnstone.

"We need the right attitude and to show them the respect they deserve," said Croft.

"Hopefully we can put on a performance on the day that will take us through."

Looking ahead to the tie at Stark's Park, Croft's team-mate James Dunne added: "I've heard the the pitch isn't the best but we have to go there, like we did against Forfar, with everyone giving 100%.

"It's a big chance, with Celtic out, for us and all the other teams to go and get some silverware.

"I know we haven't scored against Aberdeen this season but we can't be scared of them."