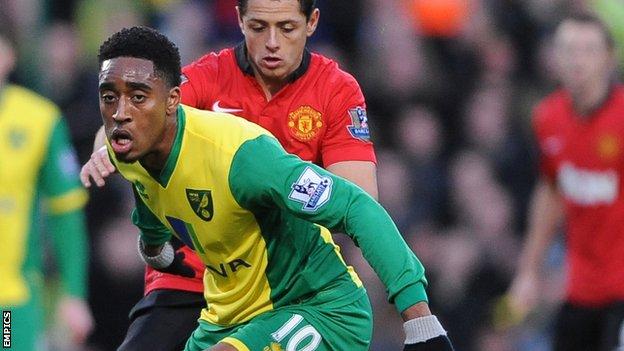 Norwich City boss Chris Hughton says injured midfielder Leroy Fer could be out for "weeks", but is reluctant to specify an exact length of absence.

"It will be a matter of weeks. He's a young lad and he's not somebody who has continuously had this type of injury," Hughton told BBC Radio Norfolk.

Fer at the finish

"We're a bit reluctant to put a timescale on it."

He added: "Sometimes the recovery time can be better than what you think."

The defeat at Villa Park was the first time Fer has not featured in a Premier League game for the Canaries since the opening-day draw with Everton.

And all seven of Norwich's league wins this term have come when the former FC Twente man has started.

There may be better news for Hughton though with the possibility that striker Ricky van Wolfswinkel could be fit to face Stoke at the weekend.

The 25-year-old had been suffering with a knee complaint.

"Ricky will train on Thursday and provided he comes through he will hopefully be available for Saturday," said Hughton.

Norwich are 15th in the table, four points above the relegation zone and two points behind this weekend's opponents.