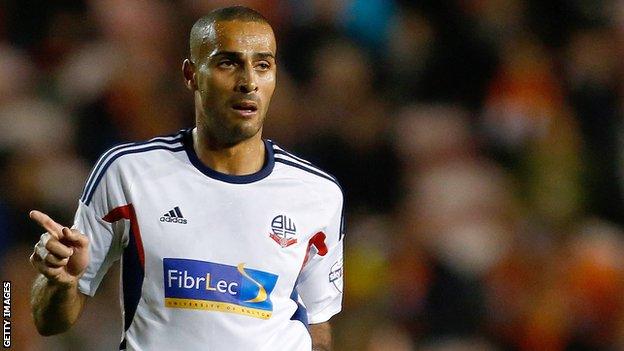 Bolton midfielder Darren Pratley will miss the rest of the season.

The 28-year-old has undergone further surgery after a recurrence of shoulder problems that affected him during his time at Swansea City.

"The surgeon found bits of screw had snapped off all over it, so he had to take them all out and restructure his whole shoulder," manager Dougie Freedman told BBC Radio Manchester.

Pratley has appeared 23 times for Bolton this season, scoring twice.

Wanderers are aiming for a third successive Championship win at Leeds on Saturday after home victories against Watford and Blackburn.

Meanwhile, Freedman says Stuart Holden is confident of returning to action following a setback in his recovery from a third serious knee injury.

The USA international midfielder, 28, tore his cruciate ligament while playing for his country in July and lasted just 23 minutes of his comeback for Bolton's reserves against Everton on Monday.

And while Freedman has said there will be a role for Holden at the club should he be forced to retire, he has said he will give Holden every chance of making a playing return.

"I went and met him the following night and he's very positive," added the Bolton boss. "No matter the outcome of it, he'll carry on and keep on going.

"He isn't the sort of guy that looks at it as bad luck. He sees it as a challenge. All he asks for is the support to get through those challenges and that's what we're going to give him."