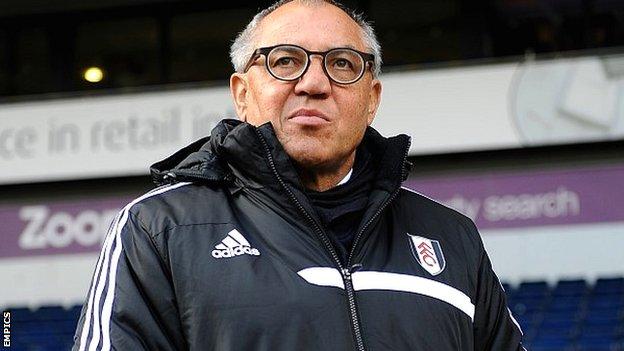 Felix Magath says trying to keep Fulham in the league is the toughest test of his managerial career, but is adamant the team will remain in the top flight.

The Cottagers are bottom with 21 points with 10 matches left, a point behind Cardiff, whom they visit on Saturday.

Magath won three Bundesliga titles, but said: "It's the most difficult because now we are behind the other teams."

The 60-year-old German added: "The team is growing together and that is what makes me sure we can avoid relegation."

Magath, the first German to manage in the Premier League, replaced Rene Meulensteen - who was only in charge for 17 matches - at Craven Cottage on 14 February.

He also won the Bundesliga three times as a player with Hamburg between 1978-1983, appearing in the same team as former England international and manager Kevin Keegan.

In a similarly distinguished coaching career he won successive titles with Bayern Munich in 2005 and 2006, and captured a third title with Wolfsburg in 2009.

Magath's first two matches at the Fulham helm have resulted in a 1-1 draw at West Brom and a 3-1 defeat last time out at home to Chelsea.

However, five of Fulham's final six matches are against teams currently in the bottom half of the table.

"The best confidence you can get is if you win," he said. "We need a win for our confidence.

"If I look at the schedules I know we have quite a good schedule in the last 10 games.

"I am convinced we will avoid relegation because we have developed in the last 14 days. Everybody has to put in a shift and push the team to give their best."