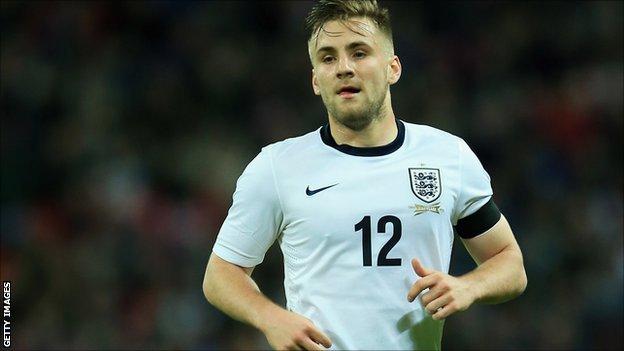 Shaw became the youngest Southampton player to win an England cap after coming on at half-time against Denmark.

The left-back, 18, is battling Ashley Cole and Leighton Baines for a place in Roy Hodgson's squad for Brazil and did himself justice with a solid display.

"It was like a dream, it was kind of weird...but I think I handled it quite well," Shaw told BBC Radio Solent.

"It has been an emotional week and the best week of my life. I'll never forget this week."

Alan Shearer was Southampton's previous youngest England debutant, having made his debut against France in 1992 at the age of 21.

And Shaw admitted he was consumed by nerves on the bench as he waited to come on, but senior players in the squad helped him settle down.

"It was very weird for me at the start [of the week]," he said. "Some of the big names were there like [Wayne] Rooney, [Steven] Gerrard, [Frank] Lampard and [Ashley] Cole. They are people I look up to and it was great to be alongside them and train alongside world-class players.

"There were a lot of nerves and I was sat on the bench shaking as I knew I was coming on at a half-time. This was the biggest game of my career but the older pros told me to enjoy myself and I did.

"Gerrard obviously knew how I was feeling, so it was good of him to get me a touch early rather than waiting anxiously for the ball to come."

Shaw has made rapid progress, having only made his Premier League debut 16 months ago, but with Everton defender Baines' World Cup place all but certain, he believes he has only a "little chance" of getting the nod for Brazil ahead of the experienced Cole for the other left-back berth.

However, he added: "Wow, I'm 18 years old, I've played in the Premier League over 50 times and now I have a cap for England and not many 18-year-olds can say that. I'm very proud.

"I felt like I had a good game, I played my normal attacking game and I felt I did well."