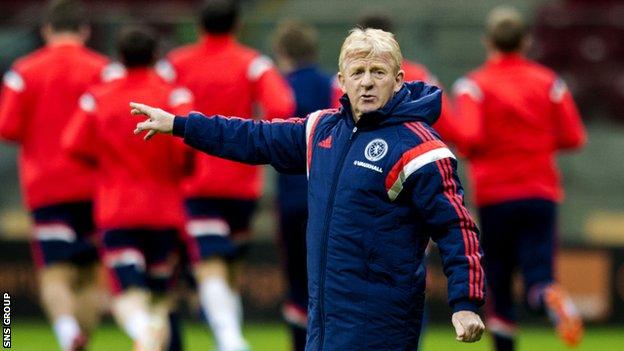 Gordon Strachan was sitting in the Jock Stein lounge at Parkhead as the sun came streaming through the window one glorious Friday afternoon in late summer during his reign as Celtic manager.

Strachan shielded his eyes from the rays, smiled and gave an example of the Scottish psyche as he understood it.

"You know what people out there are saying now, don't you?" he laughed.

"They're sitting in the heat for the first time in about six months and saying: 'It'll never last, you know'. That's what we're like, isn't it? 'It'll be raining tomorrow'. 'Oh aye, I've seen the forecast. Bloody miserable!' We're brilliant at that."

That fatalistic attitude might have been a bit of a generalisation, but it could easily have been applied to the national mood as regards the Scotland team in the eras of George Burley and Craig Levein, Strachan's immediate predecessors.

Back then there wasn't even the warmth of one day in the sun. Not really. The gloom was pretty much unrelenting.

Strachan has brought order, humour, confidence and attitude to the Scotland team

The batterings by Wales and America and Norway, the no-strikers farrago against the Czech Republic, the coronary-inducing night against Liechtenstein, the general air of defeatism and acceptance that things might never get better; that the standard of Scottish footballer had plummeted to an all-time and irrecoverable low.

Those were dog-days, no question. Scottish footballs fans brought navel-gazing to a new level.

The odd time somebody raised their head above the parapet and said: 'Hang on, this is more of a problem of management than a playing problem' they were told to get back to airy-fairy land. The mantra was that things were hopeless and the sooner that everybody realised it the better.

But things weren't hopeless. Throughout football - and you could extend the example into other team sports, such as rugby - there are countless examples of teams getting dragged out of a seemingly endless pit of despair and being galvanised by a new manager who knew, exactly, what he was doing.

During Scotland's grim years under Levein they played one such nation and will play them again soon enough - the Republic of Ireland.

Before Giovanni Trapattoni took over, the Republic were an unholy shambles, devoid of confidence and so far away from qualifying for a major championship that nobody bothered even dreaming any more.

The Italian changed the mindset dramatically. The players remained the same, pretty much. But the results improved. The football was sterile but successful. In two qualifying campaigns for World Cup 2010 and Euro 2012, Ireland played 20 pool games and lost only one of them.

In 2010 they may have qualified for the World Cup had it not been for Thierry Henry's handball in the play-offs. They were a busted flush at the finals of Euro 2012, but at least they got there. And they got there with a team of modest talent but one that was well-organised, resolute and hard to beat.

What Trapattoni did then, Strachan appears to be doing now.

The victory over Poland was not particularly easy on the eye - apart from Scott Brown's splendid finish - but it was their third consecutive away win, a fourth straight clean sheet and a fifth game in a row unbeaten.

Foundations are being put in place. The last time Scotland kept four successive clean sheets was in 1996-97 and the improving resistance at the back is instructive of the entire Strachan movement.

Not so long ago, Scotland couldn't get a shut-out to save their lives.

On Wednesday they kept Poland at bay with a centre-half, who usually plays full-back in a struggling Norwich side, with another centre-half a 33-year-old from Brighton, one full-back who is actually a midfielder and another full-back, Alan Hutton, who hasn't played a club match since June last year.

Hutton's seven games this season have all been for his country. And yet, this disparate group are raising the bar in terms of Scotland's defensive belligerence.

The manager can take an awful lot of credit for the forward momentum, but like a man looking out at the sunshine and predicting rain, he is well-grounded.

Strachan's tone after the big away victories over Poland, Norway, Macedonia and Croatia has been measured; no shouting from the rooftops, no acclamation of great progress, as his predecessor was wont to do even in defeat not to mind victory.

He provided some reality. Poland's two best players were missing. Their goal threat was blunted as a consequence. Nobody should forget that. Warsaw represented peace-time football as opposed to the intense battle that will happen the next time they face each other in the Euro 2016 qualifiers.

But the fact remains that Strachan is inching this team forward when so many thought he wouldn't.

Not since Alex McLeish's Scotland team went six games unbeaten have the national side been so hard to defeat. McLeish recognised the fatalism in the national psyche as well. He wouldn't listen to journalists bemoaning the state of Scottish football.

"All you're going to hear from me is a party political broadcast on behalf of the Positivity Party," McLeish would say, as he (and Walter Smith before him) left the awful Berti Vogts era behind.

Strachan has brought order, humour, confidence and attitude to the Scotland team.

They're stubborn. For now, you would still have to say that it's a soft recovery because the meaningful tests still lie ahead of them, but think back a year to the foul night that Wales came to Hampden and beat the Scots in Strachan's first competitive game.

It was a wretched evening in every sense. The day after, Strachan did a press conference and was almost lost for words at how bad his team had been. He looked ill.

When the press conference ended he sat with his coaches in the foyer of their hotel and I watched them for five minutes. None of them spoke. They just sat and stared into the distance.

We should always remember the parable of the naysayers in the sunshine waiting for the rain, but even those guys would have to admit that tomorrow is looking a whole lot brighter now that Strachan has hit his stride.