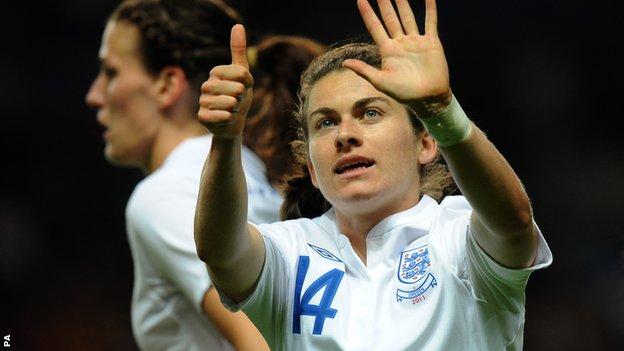 Midfielder Carney, 26, has twice caused Finland's downfall, including when she hit the winner in a 3-2 Euro 2005 victory as a 17-year-old.

She was also on target when the Finns were beaten 3-1 at the 2012 Cyprus Cup.

"In the past I've set up far more goals than I've scored, but I do need to score more," said Carney, who has netted 17 times in 90 England matches.

"The goal I got against Finland at Euro 2005 was a massive moment for me, but more importantly that was a very special day for women's football in England.

"There were almost 30,000 spectators at the Etihad Stadium, and the response we got proved there's definitely a place for the women's game in this country."

Carney converted a penalty in England's 2-0 win against Italy on Wednesday in their first game of this year's Cyprus Cup.

The Finns, who are 23rd in the world rankings, 12 places below England, need a win after they lost 3-0 to Canada in their Group A opener.

"We've carried on doing pretty well against Finland, but we won't disrespect them because they're a good team with a decent world ranking," added Carney.

England and Scotland's group matches in the Cyprus Cup

"Our objective is to reach the final though, and hopefully we can get a win to put ourselves in a healthy position going into our last group match against Canada."

In Group B, Scotland, following a surprise but well-earned 1-1 draw with France in their first match, face the Netherlands on Friday after the Dutch drew 2-2 with Australia.

Scotland head coach Anna Signeul was delighted with the result against a French team who are fifth in the world, 15 places higher than the Scots.

"The Netherlands are also above us in the rankings (14th) but I am sure the girls will step up to another big challenge," said Signeul.

"We must aim to build on our excellent performance against France.

"We are getting stronger as a team with every game we play, and hopefully this will be another step in our development."