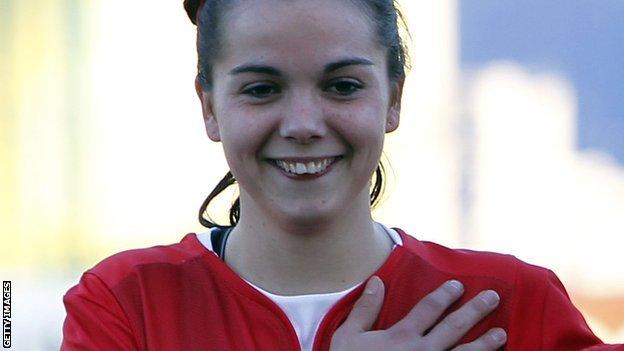 Striker Gwennan Harries has targeted a return to the Wales side as she continues her recovery from a serious knee injury.

The Bristol Academy player has been out for action since suffering an injury before the international against the Netherlands in November 2012.

The 26-year-old has trained with the Wales squad but will not feature in two friendlies against Romania.

"I'd love nothing more than to pull that shirt on again," she said.

"That's the goal, to get back and compete for places.

"The girls have done very well over the last 16 months I've been injured and it will be a big task for me to try and get back into that starting 11.

"I'm not sure how quite how far away from that. It's just about getting back into training first and foremost.

"Thankfully the session went well and the knee's reacted well so hopefully more positive steps to take from this."

Harries returned to Bristol Academy for a second spell in February 2013 after three years with Everton Ladies.

She has not featured for Wales in the 2015 World Cup qualifying campaign which resumes in April with back to back games against Turkey and Ukraine.

Jarmo Matikainen's side will warm-up for the two games with two friendly matches in the space of three days against Romania.

The first game will be staged at Port Talbot on Friday, 7 March with Llanelli's Stebonheath the venue for the second game on Sunday, 9 March.

Wales will be captained by Jess Fishlock, who was part of the Melbourne Victory side which won their first W-League title in February.

Fishlock will return to Seattle Reign following her international commitments with Wales and Harries says the 27-year-old is an inspiration to herself and fellow Wales team-mates.

"She's been a great support for me and obviously her success has inspired me as well as everyone else," Harries said.