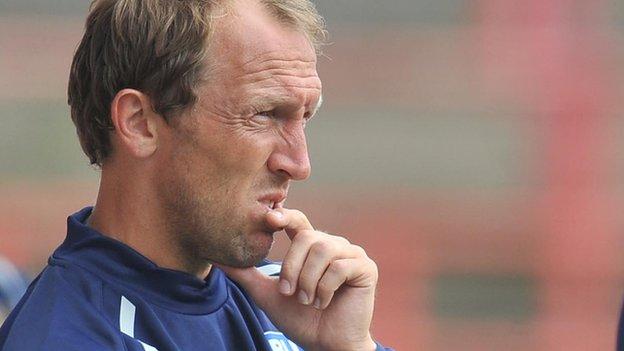 Morrell, who left the Racecourse Ground 11 days ago, has, like his former Blackpool team-mate Jackson, agreed a deal until the end of the season.

Shrewsbury have once again gone over the regulation number of five loan players - the maximum permitted in any match-day squad.

Former Republic of Ireland Under-18 international Foley, 27, could make his debut against Bristol City on Saturday.

He becomes the sixth loan player in Jackson's Shrewsbury squad.

Foley's arrival means that one of Jackson's loanmen will be disappointed for Saturday's key home date with fellow strugglers Bristol City, as only five are permitted in the squad.

The left-sided midfielder grew up in Worcestershire and started his career with Cheltenham Town, before being signed by Mark Yates for Kidderminster Harriers in 2008.

He had a loan spell with Redditch United before signing for Newport County, where he scored 32 league goals in 119 games.

He moved on to Yeovil in the summer of 2012, becoming a regular, and his seven goals helped the Glovers earn promotion to the Championship.

But he has made just four starts this season under Gary Johnson.

"We're made up to have him here," Jackson told BBC Radio Shropshire. "He came on the radar about two weeks ago and I spoke to Gary Johnson. He's got goals about him and it gives us even more competition for places."

As for the appointment of Morrell, that had been speculated about since the 37-year-old Yorkshireman resigned from Wrexham on 24 February.

Apart from a trial arrangement with former Walsall manager Chris Hutchings, which did not work out, Jackson has not had a recognised number two since succeeding Graham Turner, initially as caretaker boss, on 22 January.

"I know Andy Morrell well," added Jackson. "We played together at Blackpool. We got promoted together.

"He's been a manager himself, but he'll fit in with what we've got. He's the same as me, Wherever club we're at, we'll give everything."

With four loan strikers to choose from, Jackson also insists that he no immediate intentions of registering Morrell, who has scored once in seven substitute appearances for Wrexham this season, the most recent of them on Boxing Day, as a player. "Not for the moment," he said.