The suspension of the Ukrainian Premier League should be lifted in order to help the crisis in Ukraine, according to the chief executive of Shakhtar Donetsk.

Sergei Palkin, whose club are based in the predominantly Russian-speaking east of the country, has told Football Focus on BBC World News that "football is a positive emotion" and proposes all top-division sides replace sponsor logos on their shirts with a message promoting solidarity.

"Ukrainian clubs have millions of supporters and if we all come together to say that we should not have wars or civil problems, then we can bring a lot of value to all people living in Ukraine.

"I want all teams to remove their shirt sponsors and put some words that say we are one country. It will be a big message to Ukrainian people - in Ukrainian or Russian-speaking areas."

The decision to postpone UPL matches until further notice was made outside of football by Ukraine's ministry of internal affairs, while the national team has also been affected by civil unrest and political tension.

An international on Wednesday against the United States, which Ukraine won 2-0, was moved from Kharkiv to Cyprus.

Ukraine and Shakhtar central defender Dmytro Chygrynskiy admits it is a worrying time to live in his home country.

"The Shakhtar team feel pressure and empty," he said.

"When people are dying it is not easy to keep on working. We have to realise that nothing is more important than human life." 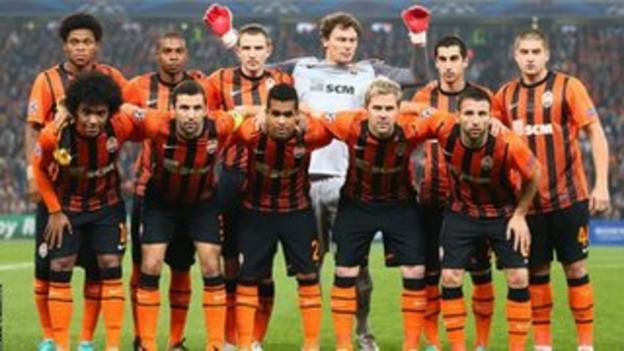 Chygrynskiy has spent 11 years at Shakhtar and won the Spanish title with Barcelona in 2010.

"Historically we are free and we want this freedom now.

Donetsk and Kiev have submitted bids to stage Euro 2020 matches - a tournament that will take place in multiple European countries - but given that UEFA will announce host cities in September, Palkin believes Ukraine will almost certainly miss out.

The country co-hosted Euro 2012 with Poland and five matches were played at Donetsk's Donbass Arena.

"The political situation in our country will influence [the decision] and therefore to be honest, I do not think they will give us anything.

"Uefa will not risk it. No one knows when the crisis will be finished."