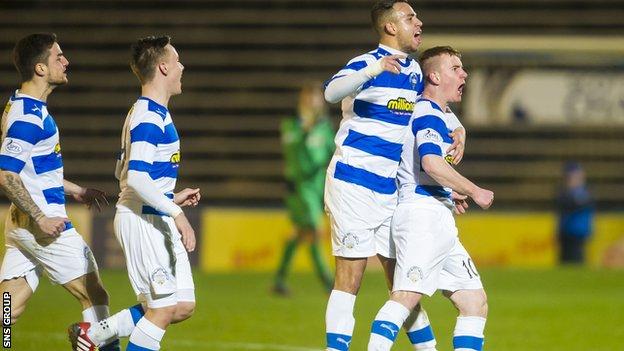 Toffee tycoon Douglas Rae looks like having a lot to chew over in the next few weeks.

That's got nothing to do with the confectionery business from which he's made millions. His current concerns centre on another of his labours of love, Morton Football Club, where life at the moment is anything but sweet.

In March last year, the Greenock club were on the brink of promotion to the Premiership, losing out eventually to Partick Thistle.

Twelve months on, Morton are careering in the opposite direction. Relegation to League One seems a grim certainty.

And just as dramatic as the transformation in their fortunes are the changes that 82-year-old club chairman Rae will soon have to contemplate.

He won't want to reassess right now, being an eternal optimist who still hopes a football miracle might be possible.

But, pretty soon, the veteran businessman will have no choice but to confront Morton's slide down the rankings and the inevitable implications.

Will the club go part-time? Nobody wants that, but there might be no alternative if the club are to cope with a further fall in income.

There would be a stigma for some about losing full-time status. But, when you cast your eye over the Championship placings, maybe it's the right way to go.

Teams like Alloa and Dumbarton operate on a part-time basis and they've picked up more than double the Morton points total so far.

The other big question mark in the event of relegation would hang over the future of manager Kenny Shiels - which seems harsh since he's barely in the door.

He took over just before Christmas and, as I write, has won only one of the 10 games in which he's been in charge.

If that sounds a poor record, you would have to remember that Morton had won only four matches in the five months before that.

However, one of those wins was maybe the biggest shock of the season. Allan Moore's team went to Celtic Park in September and knocked out the Scottish League Cup favourites.

It's a real head-scratcher to try to work out how a team that can beat Celtic is struggling so badly at a much lower level.

The team that went so close to promotion last season lost Michael Tidser, Peter MacDonald and Peter Weatherson, to name but three. A trio who banged in a lot of goals.

And, despite an early-season morale-boosting Renfrewshire Cup-winning defeat of St Mirren and that memorable night at Celtic Park, it's lack of goals that has been Morton's main problem.

When I watched them recently at home to Cowdenbeath, their front four were loan Ranger Barrie McKay and three players with top-flight experience in Dougie Imrie, Rowan Vine and Garry O'Connor.

An attack that looked good on paper produced only one genuine goal-scoring chance in 90 minutes.

Was Shiels the right choice for the quick fix Morton needed at the turn of the year?

He was hardly going to turn down the job offer, but he's a manager who likes to build something long-term at a club.

It would be good to think he'll get that chance at Morton, but that's a decision for his chairman to mull over in the coming weeks.

The future of the club is all-important.

I sat at Cappielow a few weeks back and looked around a lovely old football ground that holds so many memories. Greenock is a real football place. It deserves a team to match.