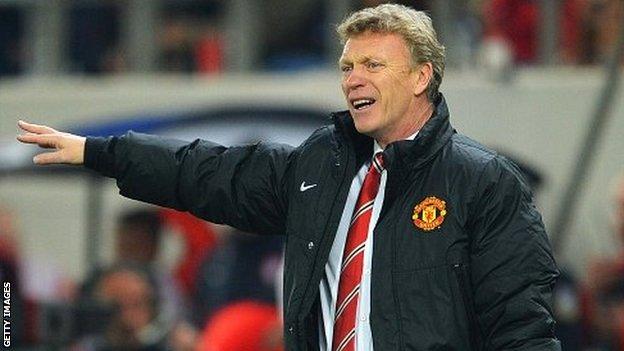 Manchester United manager David Moyes has thanked the club's fans for their loyalty in what he admits has been a "difficult" first season.

Moyes succeeded Sir Alex Ferguson, who ended his 26 years as United boss by winning a 13th league title, on 1 July.

United lie seventh after only 13 wins from 27 Premier League games.

In a magazine sent to United season ticket holders, Moyes wrote: "The difficult season we have experienced was not something that I envisaged."

United lost only five league games in their title-winning season of 2012-13, but have already lost eight times in the current campaign, including home defeats by West Brom, Everton, Newcastle and Tottenham.

They were also beaten 2-1 at home by Swansea in the FA Cup third round and are trailing 2-0 after the first leg of their last-16 Champions League tie with Olympiakos.

"You are accustomed to seeing a successful Manchester United and the backing you have given the players and me throughout the season has been incredible," Moyes continued in his letter.

"Away from home the travelling fans have remained the best in the country, while at Old Trafford your unwavering faith has been noticeable and hugely welcomed.

"Supporting your team when they are winning is easy, but much harder when things are not going as well, and the loyalty you have shown us has been magnificent.

"I have absolutely no doubt we will see great winning sides here again."

Moyes, who began his managerial career at Preston before spending 11 years with Everton, added: "Everything we have been through will make us a better, stronger team and club in the future."