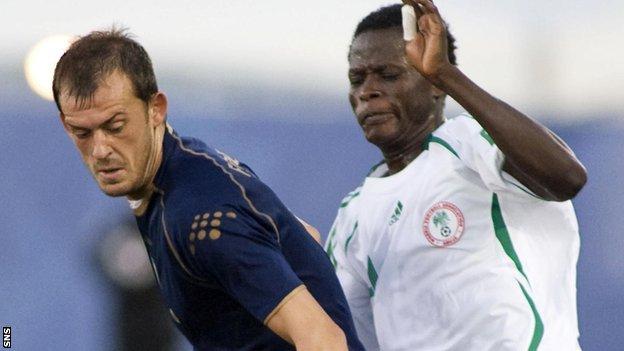 Scotland manager Gordon Strachan says playing close to home was the big attraction in agreeing a friendly with Nigeria at Fulham's Craven Cottage.

The match, on 28 May, forms part of the Super Eagles' preparations for their fifth appearance at a World Cup finals.

Scotland will be looking to extend their five-game unbeaten run.

"We considered a lot of options, but playing Nigeria in London without the need for long-haul travel was the one that appealed most," said Strachan.

With Scotland having failed to qualify for the World Cup, Strachan was attracted by the chance to test his side against a team that will be in Brazil this summer.

"We will have time for some quality training sessions before the game and we will look to finish the season with a positive performance and result that we can take forward as we finalise preparations for the Euro 2016 qualifiers," he said.

The match will be the Scots' last friendly before they start their Euro 2016 qualifying campaign against Germany in September.

They have also been drawn against Republic of Ireland, Georgia, Gibraltar and Poland, whom they beat 1-0 in a friendly on Wednesday.

"I was encouraged yet again by a lot of what I saw in Warsaw and the players are now protective of the performances and results they have put together recently," added Strachan. "We will look to continue that against Nigeria."

Wednesday's game was the fourth time in succession that Scotland have kept a clean sheet and follows away wins over Croatia, Macedonia and Norway.

Scotland last met Nigeria at Pittodrie Stadium in 2002, when the visitors came from behind to win 2-1.