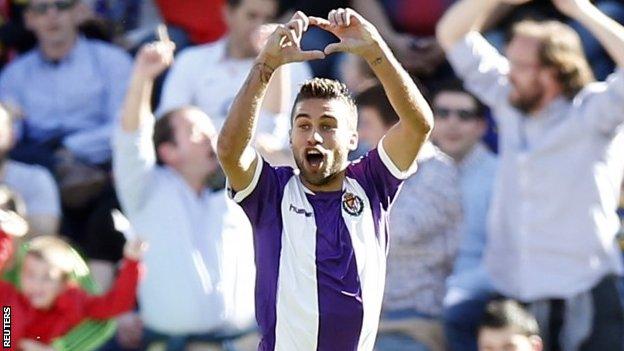 Spanish champions Barcelona's title hopes are out of their own hands after a shock defeat at Real Valladolid.

Valladolid, who started the day in the relegation zone, took the lead in the 17th minute through Fausto Rossi, who fired home after he and Javi Guerra had shots blocked.

Lionel Messi, who had a chance saved before the opener, and Cesc Fabregas forced keeper Diego Marino into more stops but they trailed at half-time for the first time in the league this season.

FCB essence [is] disappearing. This has never been only about Pep or Messi or veterans. It is much more. No structure to the team. Think about it. That means: less leadership, less work, less authority, less ideas. Less care. Whatever the result.

Messi, the visitors' brightest player despite recent on-field vomiting problems, forced another two saves after the break and Neymar blazed a shot over from close range as Barcelona could not find a way through.

Valladolid substitute Oscar Gonzalez almost doubled the hosts' lead on the counter-attack as Barcelona slipped to a third defeat in six league games and a second straight away defeat.

The Catalan club are now one point behind both Atletico and Real Madrid. Real could go four points above Barcelona with victory over Levante in their game in hand on Sunday.

"The team lacked ideas but not intensity," the Barcelona boss said. "We completely failed in generating play and that's what stopped us from getting the result.

"We lacked what makes us Barca: good elaboration in our build-up, finding spaces, breaking through on the wings and having depth. But we didn't lack attitude."

They have the chance to bounce back from their La Liga upset when they host Manchester City in the Champions League on Wednesday. The Catalans won the last-16 first-leg tie 2-0 in Manchester.