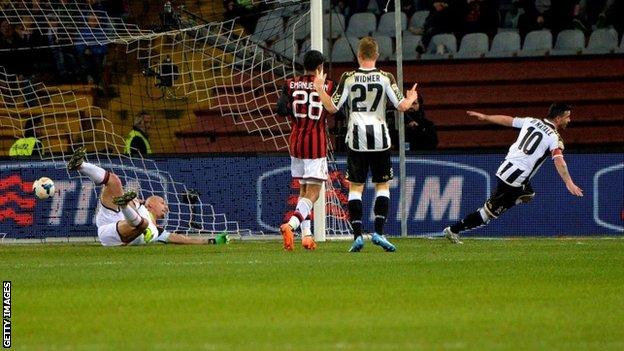 The hosts' goal came after the break with Di Natale tucking home from close range after quick passes from Roberto Pereyra and Bruno Fernandes.

It was a third defeat in Clarence Seedorf's eight Serie A games in charge of the club.

Udinese, in 14th, are now only four points behind 11th-placed Milan.

Balotelli was a 63rd-minute substitute after Seedorf dismissed claims the striker was not taking his recovery from a shoulder injury seriously.

The Italy international was criticised in the media after posting a Twitter picture of himself playing table tennis.

But Seedorf said: "Who cares if he played table tennis? He had a six-hour treatment."

"He is still feeling a bit of pain but he needs to learn to live with it."

Former Manchester City striker Balotelli, who has scored 11 goals in 19 Serie A games this season, had missed the last two games after leaving the field holding his shoulder towards the end of the 1-0 defeat by Champions League opponents Atletico Madrid.

But some newspapers questioned the 23-year-old's professionalism after he revealed he was playing table tennis on Wednesday.

However, Seedorf poured scorn on the reports and said he would not be warning his players about using social networking sites.

"I'm not here to tell people how to use their own means of communication," said the former Milan midfielder. "What makes for news in Italy is a worry to me. This is such a trivial thing."

The Rossoneri travel to Atletico Madrid on Tuesday for the second leg of their Champions League last-16 tie.