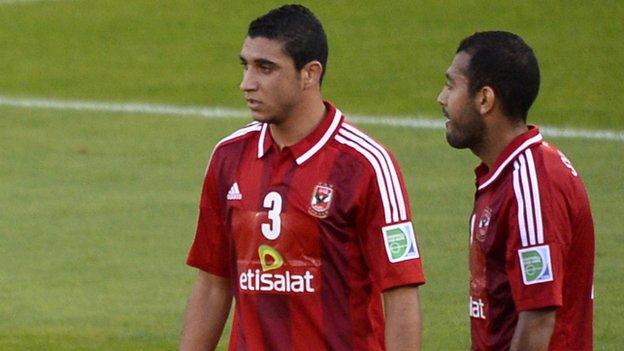 Egyptian giants Al Ahly will be desperate to avoid an embarrassing first-round exit from the Champions League this weekend.

Not only do Ahly trail Tanzanian side Young Africans 1-0 from the first leg last but their home advantage for the return match has been lessened.

After crowd trouble at the recent Super Cup in Cairo, the authorities have banned Ahly from playing at the their home ground in the capital.

They will hosts Young Africans behind closed doors at the Harras El-Hedoud Stadium in Alexandria.

Ahly supporters injured 25 policeman last month during clashes after their side's victory over Tunisians CS Sfaxien at the Cairo Stadium.

"Authorities are reluctant to hold any football match in the presence of fans after what happened in the recent Ahly game," Egyptian Football Association spokesman Azmi Megahed said.

Ahly, seeking a record third consecutive Champions League title, were forced to defend for much of the match in Dar es Salaam.

However, the Egyptian barricade was finally breached eight minutes from time when Nadir Haroub nodded a cross past goalkeeper Sherif Ekramy.

History favours Ahly as they have averaged four goals a game against Young Africans in three previous matches at home against them.

But the Tanzanians possess a stronger squad than in the past, have experienced Dutch coach Hans van der Pluijm, and have prepared thoroughly.

Gone are the days of haphazard build-ups with 'Yanga' spending two weeks fine tuning in Turkey as they seek only a second group-stage appearance.

Young striker Amr Gamal believes Ahly were unlucky losers last weekend and predicts his team will march on to the final qualifying round.

"It was tough in Tanzania but we did not deserve to lose," he said. "We will win at home and progress to the second round."

Zamalek, Cairo neighbours of Ahly and five-time Champions League title-holders, are also uncomfortably placed having won only 1-0 at home to Angolans Kabuscorp.

"I am positive we will qualify," stressed Zamalek coach Ahmed 'Mido' Hossam to reporters ahead of a long journey to Luanda in south-west Africa.

"A bigger victory margin would have been nice, but I am satisfied with the result. We will play better in Angola and win again."

Other former African champions in precarious positions after 1-0 away losses are Moroccans Raja Casablanca and Cameroonians Coton Sport.

Democratic Republic of Congo outfit Vita expect to advance after holding Dynamos 0-0 in Zimbabwe, and other former title-holders Esperance, Mazembe and Setif are even better placed.

Tunisians Esperance have a 3-2 lead and home advantage over Kenyans Gor Mahia and Mazembe host Cameroonians Astres on level terms after a 1-1 Douala deadlock.

Setif were the most convincing first-leg winners, firing five unanswered goals past ASFA Yennenga, and turning the return match in Burkina Faso into a formality.

But Nigerians Enyimba are in serious trouble, having to visit Mali after suffering a stunning 2-1 home defeat by unfancied Real Bamako.