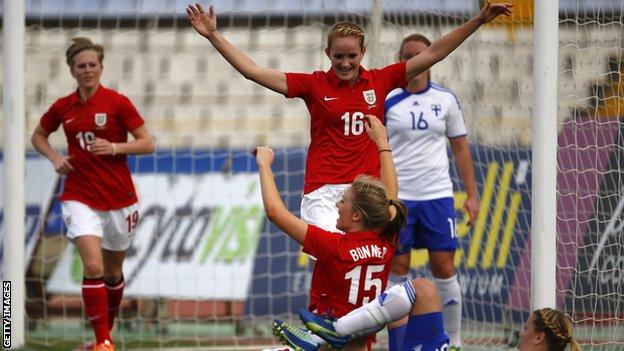 Striker Lisa Evans scored a hat-trick inside the first 33 minutes as Scotland beat Group B rivals the Netherlands 4-3 at the Cyprus Cup.

Evans opened the scoring on 15 minutes, doubled her tally two minutes later and added a third before half-time.

The Netherlands scored twice themselves in quick succession before the break, but Jennifer Beattie scored before the Dutch netted a 69th-minute consolation.

This was another tremendous result for us

In Group A, England were comfortable 3-0 winners against Finland.

They took the lead through Malmo midfielder Anita Asante on the half-hour before second-half goals from Liverpool central defender Gemma Bonner and Chelsea striker Eni Aluko wrapped up victory.

The Finnish goalkeeper pulled off an even better stop from right-back Jade Moore's 15-yard effort five minutes after the break.

England then had a let-off as a 54th-minute header from striker Sanna Talonen rebounded off the far post and into the arms of keeper Carly Telford.

Sampson said: "We changed the starting line-up to freshen things up but also to give players the chance to show what they can do in this team.

"I asked the players to show intent and a winning mentality, and they did that. In the first half we were a bit sloppy at times, but in the second half we raised the tempo.

"The most important thing was that right up to the final whistle they showed the will to work hard, to go on looking for goals but also to keep a clean sheet."

Scotland started their game at a blistering pace but goals from Renee Flegurs and Lieke Martens meant they only led 3-2 at the break despite Evans's hat-trick.

Beattie, whose own goal allowed France to draw 1-1 with her side in their opening match, scored 10 minutes after the interval before Gabriella Melis pulled another goal back in the 69th minute.

Scotland head coach Anna Signeul said: "This was another tremendous result for us against a team who are much higher than us in the world rankings.

"Lisa was absolutely brilliant up front and thoroughly deserved her hat-trick.

"We suffered from tiredness after the fantastic effort we put into the game against France, but we showed real determination to keep our lead."

Scotland face Australia on Monday, with England meeting Canada - whom they beat in last year's final - in their last group outing.