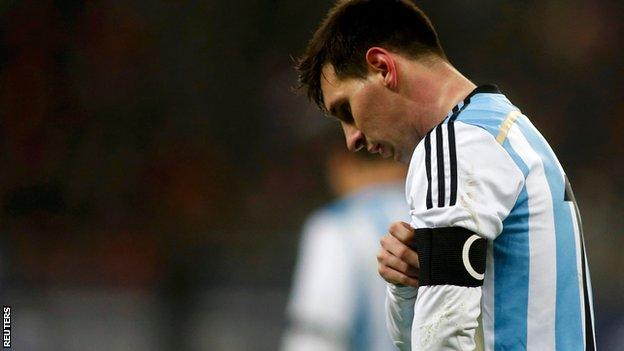 Barcelona star Lionel Messi has been to see medical experts after vomiting during recent matches.

Messi, 26, was sick on the field during Argentina's midweek draw in Romania.

"Something is not right, but it doesn't affect his performance. It happens to him regularly," said Barcelona boss Gerardo Martino before Saturday's match at Valladolid.

"But it isn't a cause for concern. It doesn't affect him at all in terms of doing his job."

The four-time Ballon d'Or winner also appeared to vomit on the pitch during half-time of Argentina's friendly against Bolivia in March 2013.

It has been previously reported that he has been sick during matches for the Spanish champions.

"He has even gone to see specialists at certain times but their tests have proved inconclusive," added Martino.

Meanwhile, the Barca coach says skipper Carles Puyol, who will leave the Nou Camp at the end of the current season, is irreplaceable.

The 35-year-old Spain defender has made 593 appearances for the reigning La Liga champions since making his senior debut in 1999.

"I've only worked with him for seven or eight months, but that's enough to say what I said," said the Argentine.

"He is the type of player that a club has only once every so often. Life goes on at Barcelona, and the club will look for a replacement, but he'll always be in everyone's heads because he leaves an indelible mark."