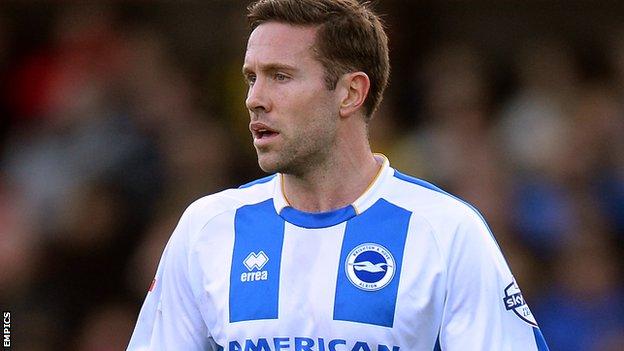 The Seagulls, who are three points off the play-offs, welcome seventh-placed Reading on Saturday and host fourth-placed QPR on Tuesday.

"This game and Tuesday's game will shape the remaining few games of the season," he told BBC Sussex.

"Even if the results don't go quite as well, there is a lot of football to be played. We are in a good place."

The 34-year-old defender added: "This kind of fixture build-up at the end of the season is just the way it is.

The Sussex club's Championship promotion challenge has been build on a solid defence, with Upson at the heart of the back four alongside Albion skipper Gordon Greer.

The Amex Stadium outfit have conceded 27 league goals, the third-best record in the division, and have kept 15 clean sheets in 32 games.

"It is a good defensive record to have and something we have worked very hard collectively as a team to achieve," Upson added.

"It is a vital part of the game in getting results. It is good it is going quite well.

"It is no different to the attacking part of the game. You are always looking to improve and get better."

Greer won his third international cap for Scotland in the win over Poland in midweek and Upson says their partnership at centre-back is flourishing.

"We understand each other," the former England international said.

"We have played together for just over a year, communicate well and are both senior players.

"We have had a lot of experience and understand the game and where people need to be around us. We try and organise and get in as good a shape as possible.

"I'm really pleased for him. He is in a great place to go on and stamp a claim for a regular shirt [for Scotland]."