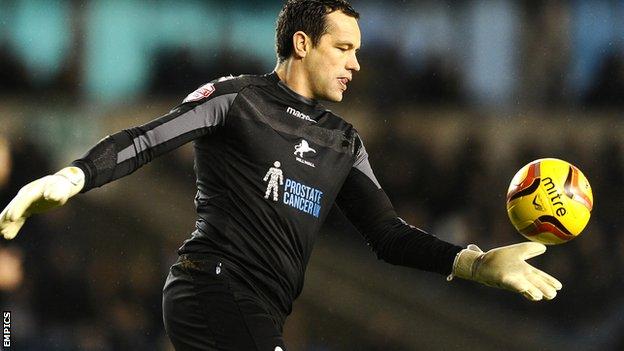 Millwall goalkeeper David Forde has backed the side to turn around their form as they battle relegation.

The Lions are one point above the drop zone, having won just one of nine matches since Ian Holloway took charge.

"He has got his way of playing and it is slowly but surely getting into us," Forde told BBC London 94.9.

"It does take time and it is not an instant fix. I think once we get up and running under this manager, we will be a force to be reckoned with."

Holloway arrived at The Den in early January, when the south London club was then also a point above the bottom three in the Championship table.

However, the three teams below them all have games in hand; Charlton Athletic have three, while Yeovil and Barnsley - both two points behind - have played one game fewer.

Millwall's only win under Holloway so far came in his second game in charge.

"The manager has had a lot to deal with," 34-year-old Republic of Ireland international Forde added.

"It is a difficult job because the team is in transition.

"Kenny [Jackett, who resigned as manager last summer] had his ideas and his players - and there was the previous manager with Steve Lomas [who was sacked on Boxing Day].

"You look at what he [Holloway] went on to do at Crystal Palace and Blackpool.

"He has definitely got the right ideas and he is very enthusiastic. It does catch on."

Forde is optimistic Millwall can end their seven-match winless streak and move away from danger.

"It is hard because the majority of the time I have been here we have been quite successful and done very well," he said.

"It is a bit tough at the moment as we are struggling at the wrong end of the table.

"We have played very well over the last four weeks but seem to be getting punished for every little mistake we make.

"Hopefully our luck will change soon and we can go on a good run.

"We dominated possession against a very good Brighton side on Saturday, which they normally do to teams, so we have got positives to take out of that as well."