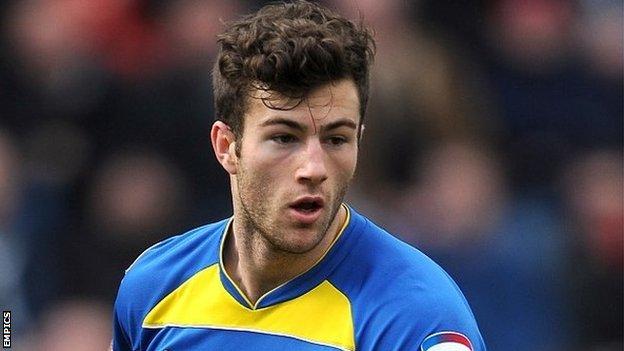 Oxford United defender Jonathan Meades is hoping to be fit in time to help the Us get "over the line" for promotion.

The 22-year-old signed for the club in May but has been forced to wait for the chance to make his competitive debut, after injuring his ankle in Oxford's last pre-season game against Coventry.

Meades told BBC Radio Oxford: "I'm fit and ready to go and want to be in contention as soon as possible.

"Hopefully, if I can get on the pitch I can help push the boys over the line."

I've been around the lads and they've been doing well all season, so it's been hard to feel a massive part of it

The former Bournemouth player's return to training finally came in the same week that he celebrated his birthday.

"It's been very mentally difficult," Meades added. "I've had some very down, down days.

"I started training on Monday, so hopefully I am not far from playing.

"I love football but luckily the boys, club and friends and family have helped me through it.

"I've tried to support the boys as best I can, so it's been a little like being a fan.

"It's been a bit surreal. I've been around the lads and they've been doing well all season, so it's been hard to feel a massive part of it."

Meades, who started his career with Cardiff, spent last season on loan at AFC Wimbledon and scored one goal in 26 appearances.

"When I went down I knew it was bad one," Meades said of his injury. "I've not had many bad, bad ones.

"Because I've never experienced that I didn't think I'd be out for this long, so I'm really happy to be back.

"I don't want to put a timescale on it, it's how I react now to the next few weeks of training - hopefully as soon as a possible."

"We have put ourselves in a really good position and have a really chance of being in League One next season."