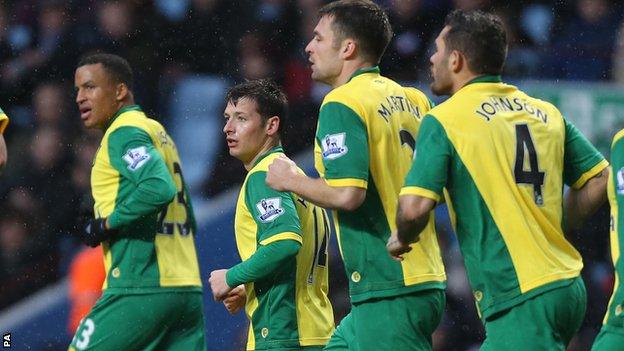 Former Canaries boss Paul Lambert was reportedly interested in signing the 31-year-old for Villa in January.

Hoolahan scored the opening goal in Sunday's 4-1 loss at Villa Park, but his celebration was subdued.

"I certainly didn't mean to disrespect anybody with the celebration," he told the club website.

"And I'm sorry if anyone's taken it the wrong way because I was over the moon with my goal.

"I've got so much respect for the Norwich fans because they've given me a lot of support over the years.

"It's been a difficult few months but I certainly wasn't disappointed about scoring; I was delighted with the goal.

"I did a fist-pump and throughout the whole game I ran my heart out for the fans and for the team."

Hoolahan is Norwich's longest-serving current player, having joined from Blackpool in 2008.

He was a key part of the side that won back-to-back promotions from League One to the Premier League under Lambert in 2010 and 2011.

But he has started just six Premier League games for Chris Hughton's side this term and had a transfer request rejected in January.

"It's been frustrating being out of the side; of course every professional footballer wants to be playing," he said.

"Once the window closes you know where you stand and my head's definitely here.

"I've got to work 100 per cent, which I've always done when I've pulled on the Norwich City shirt, and I'll always be fighting for the team until the last minute of the game."