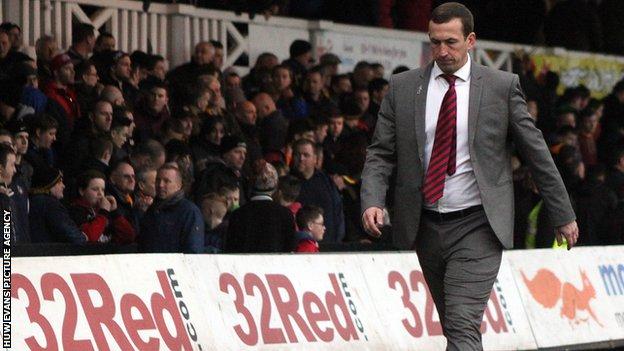 Manager Justin Edinburgh has hit back at suggestions Newport County's recent form is that of a side fighting relegation.

Edinburgh's side have won only one of their last 11 games, but are only six points off the League Two play-off places.

"People are saying it's a terrible run and it's relegation form. It isn't," he said.

"If we were a relegation team we would be sitting in the bottom two."

Edinburgh added: "We had a very good start because of good reasons.

"We played at home and away, played on a good pitch and had a lot of players fit.

"There's a lot of reasons for the form that we're in.

"We lost a lot of players, we've played a lot of games away from home and we have to endure a very difficult pitch. It's not excuses, it's facts.

I want the fans to be happy, of course I do and I reckon 99.9% of them are very happy where they are

"It's been hard to please people this season.

"Certainly over the last couple of weeks I don't think people have enjoyed the situation the football club are in.

The Exiles have endured a frustrating time with one win in 11 games as well as a host of home games postponed due to the bad weather which has left the Rodney Parade pitch in a poor condition.

Newport gained promotion back to the Football League after an absence of 25 years following a 2-0 win over Wrexham in the 2013 Conference Promotion final.

Former Tottenham defender Edinburgh has been pleased with his side's progress this season despite the recent frustrations.

"People would have snapped my hand off for that this time last year, but you can't please everyone.

"Why has someone not said four draws in 11? There's been a lot of very good performances against a lot of strong teams.

"We just try and win every game that we play in and the next one is Saturday."

Newport's opponents on Saturday are Mansfield, who also secured a return to the Football League last season as Conference Premier champions.